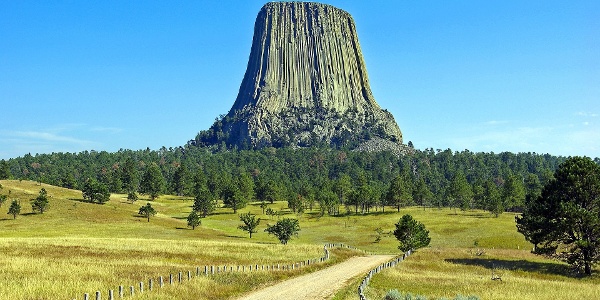 From the wide, flat prairies of Wyoming, a round mountain with deep grooves suddenly rises – the Devils Tower. America's first national monument is quite an unusual natural monument, a true paradise for climbers, and a sacred place for the natives. However, its name is misleading because the mountain is not the home of the devil but of a bear.

The Legends of the Native Americans 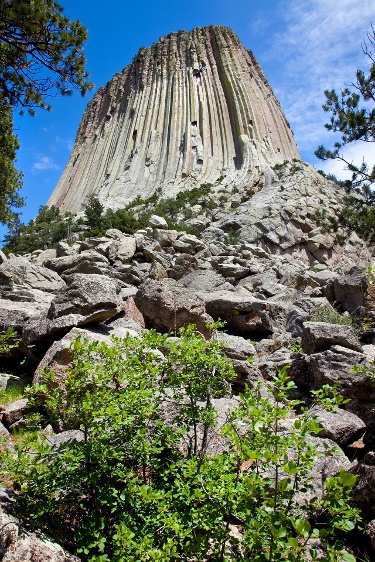 Devils Tower
Photo: CC0, pixabay.com
Over the years, numerous Native American tribes have lived in the immediate vicinity of the Devils Tower and have thought about the origin of this strange natural monument. Each Lakota, Kiowa, Cheyenne, Crow, and Arapahoe tell legends of a mysterious bear.

The stories differ in details, but the basic idea is that one or more Native Americans have to flee from a bear. They save themselves on top of a rock and implore the Great Spirit to help them. The Great Spirit then lets the rock grow. The bear tries to reach his pray but the Native Americans are to high up. His claws streak down the rock and leave their marks there.

The story ends in each legend very differently: Sometimes girls stay on the mountain, sometimes they have turned to stars, sometimes boys get rescued by an eagle and sometimes there is no exact description of how the Native Americans were saved. However, in almost every legend, the rock was from then on the bear’s home. For this reason, the natural monument is also called ”Bear's Tipi”, ”Bear's House”, ”Bear's Lodge” or ”Home of Bears.”

The misleading name for the Bear Mountain

But why isn't the towering mountain called how the Native Americans named it centuries ago? The name ”Devils Tower” comes from Colonel Irving Dodge, who explained it as follows in 1876: On the old maps, the Native American name ”Mateo Tepee” (= Bear Lodge) is written. The common translation for this expression is ”bad god's tower”. From this, the more elegant “Devils Tower” derived. Today the name is considered a mistranslation, but a change of name cannot be done just like that. And why the wrong spelling? The name was determined according to geological standards, the apostrophe was omitted, therefore, the mountain is not correctly called ”Devil's Tower”. 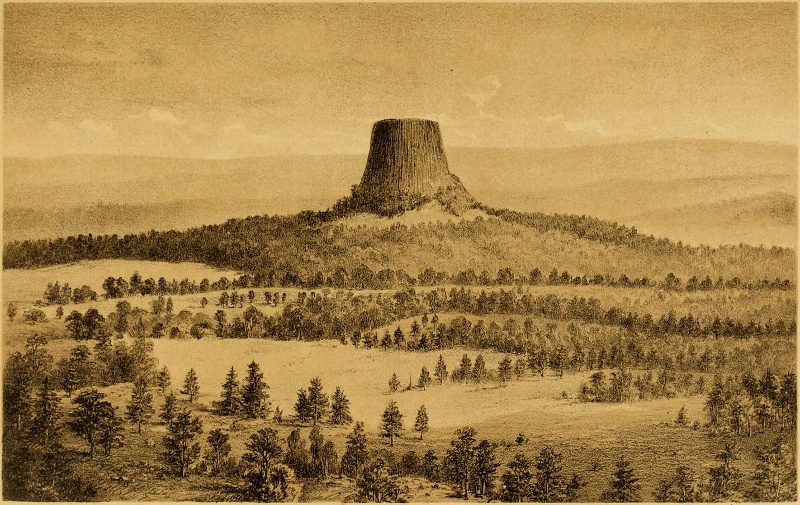 Devils Tower in the Report of the 1875 Expedition
Photo: CC0, Wikimedia Commons

The actual origin of the Devils Tower

Geologists have found a slightly different explanation for the origin of the Devils Tower. About 50 million years ago, the Black Hills were formed in the course of the plate tectonic changes in western North America. Alkaline magmatism then formed the Devils Tower – the liquid rock was pushed to the surface and up, towards the sky, magma ate its way through the sedimentary rock and as it cooled, it eroded, leaving the rock with its deep grooves.

A popular destination in the northeast of Wyoming

Today, the first national monument of the USA is an excursion destination. The imposing rock, which stands out from the surroundings, also offers an ideal motive and puzzles. In the visitor center, there is a lot to learn about the geology of the tower and the surrounding nature. The culture of the Native Americans from the prairie is also highlighted. Around the mountain, there is a circular path of approximately two kilometers, so that it can be admired from all sides. The Devils Tower is especially popular among climbers – they have to register at the ranger station and should not underestimate the ascent.

Some may remember the Devils Tower from Steven Spielberg's film ”Close Encounters of the Third Kind” from 1977, where the fields next to the rock are the landing places of aliens on earth.