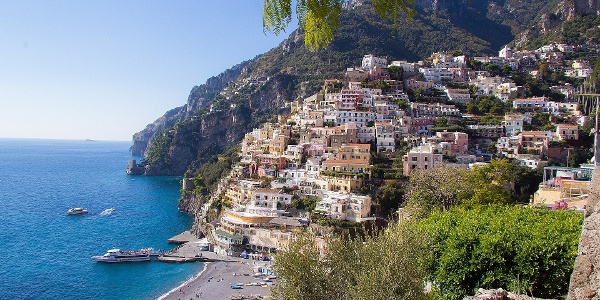 Amalfi Coast Photo: CC0, pixabay.com
Panoramic view of Positano Photo: CC0, Wikimedia Commons
Amalfi Panorama Photo: CC0, Wikimedia Commons
The Amalfi Coast near Ravello Photo: Charlie Dave, CC BY, Wikimedia Commons
path of the gods Photo: CC0, pixabay.com
Photo: CC0, pixabay.com
Open in App
Share
Bookmark
My Map
Print
Plan a route here
Rugged cliffs, steep slopes, narrow passageways and in between everywhere the sea – the Amalfitana is perhaps one of the most beautiful and exciting coastal roads in the world. Because the 40 km long and very narrow route in the south of Italy is not for the faint-hearted. Sometimes even so narrow that two cars can only pass each other by a hair’s breadth. With a height of about 100 meters above sea level, you get the feeling that you are driving continuously right on the brink. The location on the bluff is, however, the reason for the breathtaking views, which are presented to us permanently.

Awakened from a deep slumber

The Amalfi coast looks back on a glorious history: here, the first Maritime Republic of Italy was founded and established influential trade relations to Syria and North Africa. But very soon, Pisa and Genoa caught up and pushed the region out of business.
Scenic Route · Napoli

49.9 km
1:18 h
3313 m
3350 m
Sorrent‘s steep coast offers spectacular views over the Mediterranean and the coast trip until Salerno.
from Wolfgang Paulus,   Outdooractive Editors
Over centuries, the coastal landscape had fallen into a deep slumber. Only in the 1850s, with the construction of the Amalfitana, it was kissed awake. Sun-seekers from all of Europe discovered the beauty of the wild rugged landscape. The steep rocks, narrow bays as well as the terraces of wine and lemons were inspiring many painters and artists. 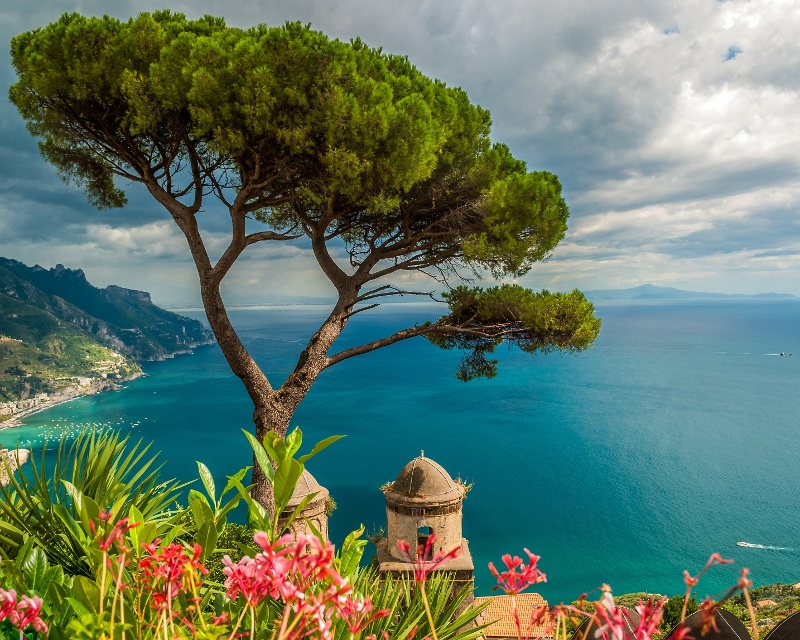 Positano, the pearl of the Amalfi coast

Our trip down the Amalfi coast leads us from Positano to Vietri sul Mare. The narrow road meanders through the picturesque villages, which cling to the rock. Positano is characterized by steep passageways and uncountable steps, which are accompanying us every now and again and help us to get the necessary movement during our stopovers.
Before the Amalfitana was built, the village had been accessible only by boat or over narrow mountain paths. The ideal place to get in the mood of the “dolce far niente” – the sweat pleasure of doing nothing – while enjoying a nice cup of espresso in a charming little café. Many boutiques sell “Positano-Moda”, a rustic style which is designed and made here. The pieces are characterized by their natural material and colorful designs. 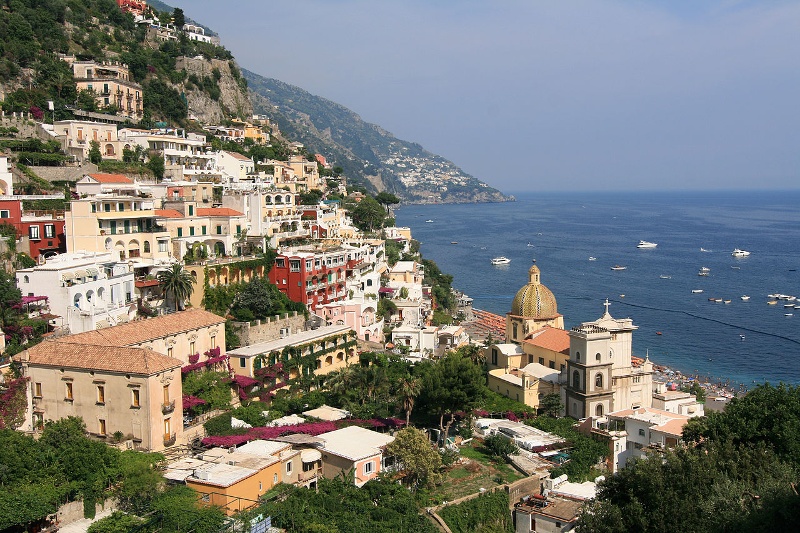 The actual Amalfitana starts at the exit of the village. On the left side, the Lattari mountains tower, on the right side greets us the Li Galli archipelago with its three islands. In between, daring viaducts, gorges and enchanting villages, such as Praiano, appear again and again. To get to Amalfi, Minori, and Maiori we descend to sea level. 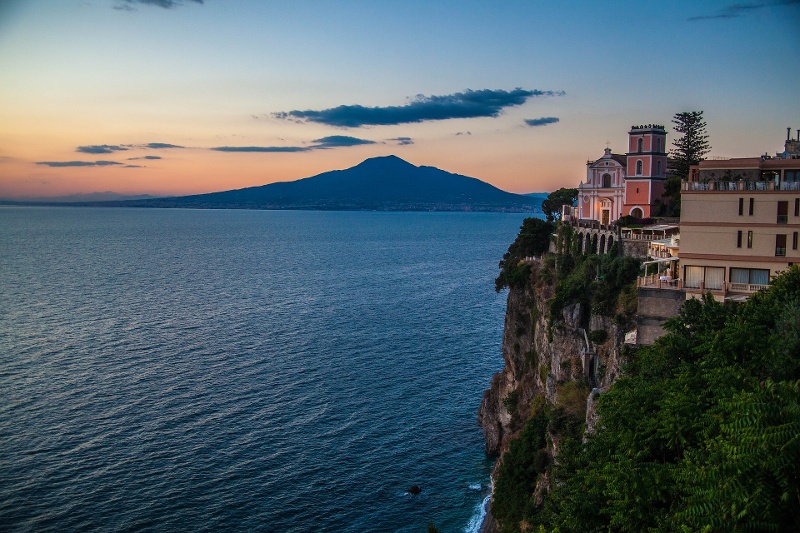 Amalfi – touristic center of the coast 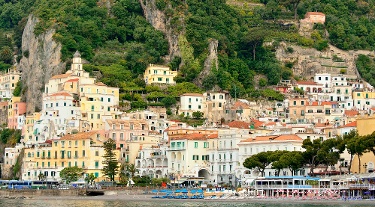 Amalfi seen from a boat
Photo: Peter K Burian, CC BY-SA, Wikimedia Commons
Amalfi is one of the most important touristic centers in the South of Italy and at the same time the eponym of the coast. In the summer month, you better avoid Amalfi because then the driving pleasure is threatened by kilometer long traffic jams. The best time to travel there is in early spring or fall season when the inrush of tourists has calmed down but the sun rays are still pleasantly warm.

In Amalfi, it’s a good idea to take a detour to the duomo and the Grotto Smeralda. They are located a few kilometers westwards from the village. We reach the grotto of the Amalfitana over a lot of steps – hardly surprising. But the interior can be explored more relaxed by boat. During the Christmas season, there is a manger underwater.

An impressive cave with unusual reflections of light on its inside and a hidden Jesus sculpture
from Wolfgang Paulus,   Outdooractive Editors
In Atrani, the advantages of the lack of large hotels, tourist attractions and above all the lack of parking spaces are just as crystal clear. Here, the original character of the village is still visible. Active people will enjoy the few hiking trails which lead from Atrani over steep stairways to Ravello and alongside the coast to Castiglione del Genovesi as well as Minori. 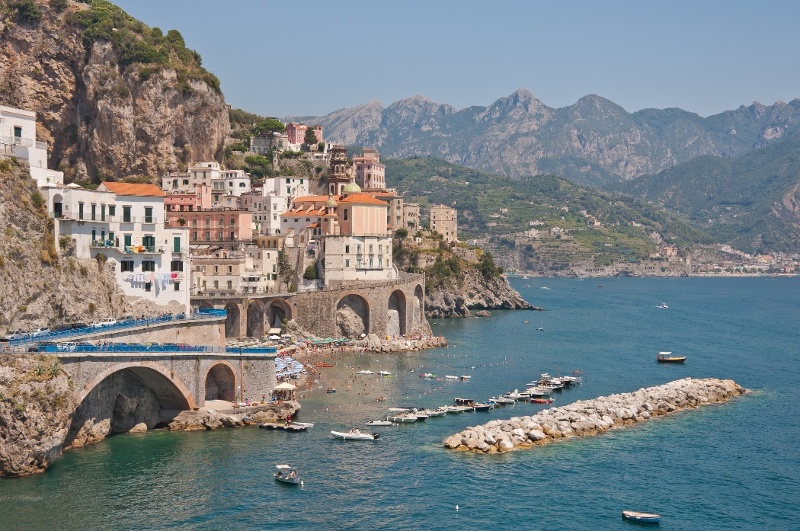 Vietri sul Mare – the ending of the Amalfi coast

The end of the Amalfitana is the seaside resort of Vietri sul Mare. The endpoint of the Amalfi coast lies at the foot of Monte Liberatore. The town's landmark, the Duomo San Giovanni Battista with its beautiful campanile rises on top of the highest point of the historic city.
Village · Salerno

Salerno
A spectacular coastal destination with traditional craftsmanship
from Wolfgang Paulus,   Outdooractive Editors
Those who have not yet stocked up on souvenirs, such as the delicious Limoncello liquor, now is the time to make family and friends at home happy by bringing them handcrafted ceramics. Already in the middle ages, the famous Vietri tiles, vases, plates, and other ceramics were made here. They have a special Mediterranean touch, which is adored by so many and brings a bit of sunshine to daily life.
If you are now in the mood of the sweet pleasure of doing nothing, better get in a convertible, let the warm wind blow through your hair, hum an Adriano Celentano song and enjoy the wild Amalfitana. 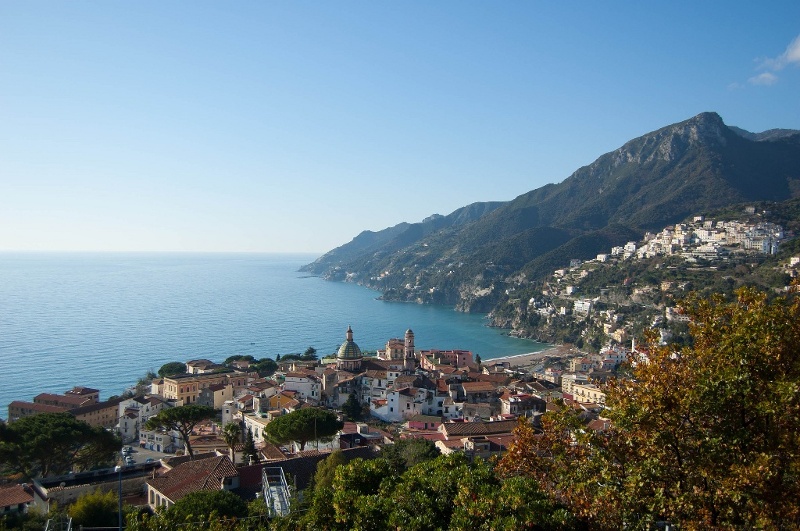