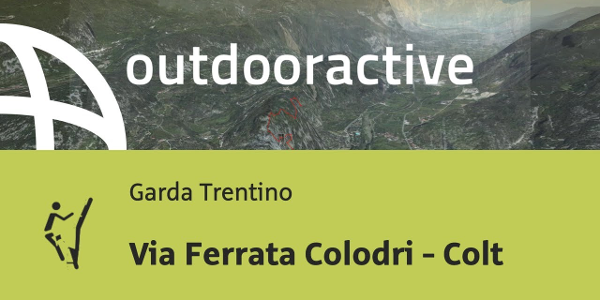 The east face of Colodri witnessed the birth of free climbing in Arco in the seventies and eighties when the first modern routes were freed and it became a reference  point for the first climbers.

The bolted trail was created as a descent trail for the hundreds of climbing teams that scale the sheer walls.

It is easy to get to, relatively simple and has a handy descent trail which makes it the perfect place for anyone approaching the vertical world for the first time. In fact it has quickly become the most popular via ferrata in Garda Trentino for beginners and families.

Put on your helmet, harness and ferrata set, and in a few minutes from Prabi you are at the start of the ferrata. After a section with cable and steps, you come to a smooth wall which is the baptism by fire for the absolute beginner: the rungs and safety cable will help you overcome any fear. Shortly before the top there is one last vertical stretch fitted with rungs for an exciting finish.

From the summit of Monte Colodri the view stretches from the Castle rock over the entire vale of Garda Trentino.

The information on this chart is subject to inevitable variations, so this means that none of the indications are absolute. It is not entirely possible to avoid giving inexact or imprecise information, given how quickly environmental and weather conditions can change. For this reason, we decline any responsibility for changes which the user may encounter. In any case, the hiker is advised to check the conditions of the places, environment and weather before setting out.

In Prabi take the trail in front of the car park of the municipal swimming pool which leads you to the foot of Monte Colodri and in a few minutes you are at the starting point of the ferrata.

The start of the Via Ferrata is above the limestone boulders at the foot of the east face of Monte Colodri. The first stretch is a track which zigzags up side of the rock. After a short vertical section, continue diagonally to the left until you come to the base of a smooth slab fitted out with rungs (1). Head up diagonally to the left following a cleft in the rock which brings you to the final upward stretch. The final vertical section is fitted with rungs and stirrups to take you past the short dihedral which takes you over the top of the wall. A limestone slab of karst formation with plenty of cracks and clefts takes you to the cross at the top in just a few minutes.

From the summit follow the Sentiero dei Lecci trail and head down to Laghel. From here it is about 15 minutes to the centre of Arco.

VARIATIONS OF THE CLIMB COLODRI FOR MOUNT COLT

From the cross of Mount Colodri go north - SAT 431 B - until you arrive at the cliffs. Continue along the “via ferrata” (there are security wires to hold on too) that goes down westwards until SAT 431, follow the path going north until you reach the hills just before the peak of Mount Colt, remaining near a pylon. 45°56.511 N - 10°53.637 E. You go down the path east of Mount Colt, after a few meters you’ll find a safety wire. This wired path is not technically difficult but it’s exposed and requires climbing equipment ie. boots, harness, helmets. There is a metal ladder to enable you to climb the last rock, then you go down to Malapreda valley. Return to Prabi taking the roman bridge of Ceniga, close to Arco (40mins).

The towns in Garda Trentino - Riva del Garda, Torbole sul Garda, Nago and Arco – are connected by a number of urban and intercity bus lines which will take you to the starting point or in the immediate surroundings.

For up-to-the-minute information on timetables and routes: www.gardatrentino.it

How to get to northern lake Garda / Garda Trentino: www.gardatrentino.it

Free parking in Caneve (5 min. walk from the town centre). 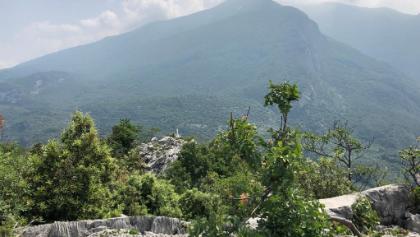 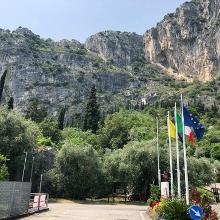 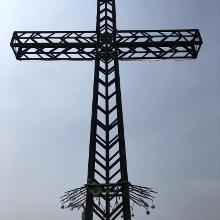 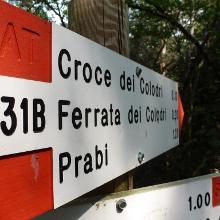