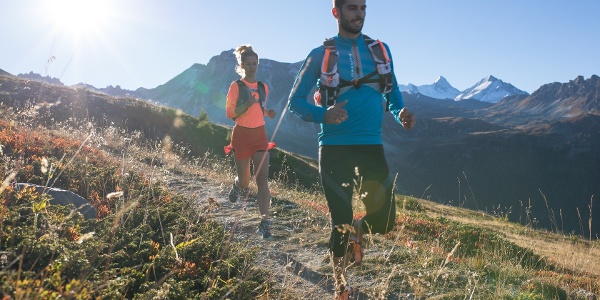 Run along a 16.8 km loop that partly follows the course of the iconic Sierre-Zinal race, in sight of the “Imperial Crown” of 4,000-metre peaks.

The official starting point of this trail is in the village of St-Luc, but you can also choose to begin at Chandolin, Tignousa or Le Tsapé – which can be reached by public transport, funicular or chairlift respectively. As you follow this loop, with a vertical ascent of 1,081 metres, you will be following part of the course of the iconic Sierre-Zinal trail running race, which attracts more than 5,000 participants of all levels every year in August. The route leads through villages and forests and across alpine pastures, in sight of the valley’s famous “Imperial Crown” of 4,000-metre peaks; it also takes in the fascinating Planets Trail. Up at the Pas de l’Illsee, where the French- and German-speaking regions of Valais meet, follow the trail of the Chenegouga, legendary creatures of the Val d’Anniviers that produce a hell of a din!

Explore the solar system along the Planets Trail between Tignousa and the Hôtel Weisshorn, and visit the François-Xavier Bagnoud astronomical observatory.

More information about the destination:

Starting in St-Luc, follow a path that leads from the church towards Chandolin. The itinerary begins with a relatively steep climb above the village of St-Luc. Run for about five kilometres through a forest of larch and Swiss stone pine trees, typical of the Val d’Anniviers, until you reach Chandolin, one of Europe’s highest villages inhabited year-round. Continue your route across the Chandolin pastures to reach a col, the Pas de l’Illsee, and then traverse the mountainside to Le Tsapé. Then head up to another col, the Illpass, before turning off to the south to run along a wide track that offers a panoramic view of the Rhône valley; this takes you all the way to Tignousa. From here, follow the Planets Trail for several kilometres as far as the Hôtel Weisshorn, before tackling the final descent back to St-Luc via Les Girettes.

Take a train to Sierre, then continue by PostBus to St-Luc.

Take the A9 motorway to junction 29 (“Sierre-Est”), then head up the Val d’Anniviers, following signs for St-Luc.

Parking is free in summer in the Val d'Anniviers. Park in the car park at the base station of the St-Luc funicular.

The tourist office in St-Luc can provide information on trail running in the region.