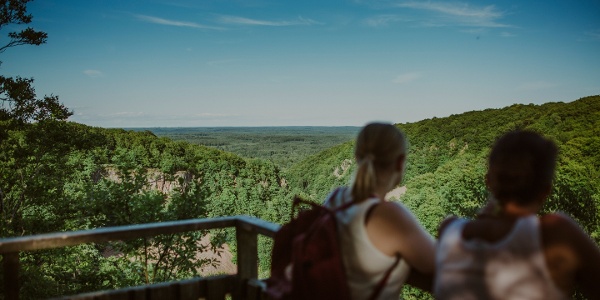 From Åstorp station we walk southwest over Köpmansgatan. We cross the tracks on a bridge and then follow the road to the right until we reach a car park on the left side of the road after about 1 km. This is where the trail begins. We follow it into the forest and follow the signs for the rest of the way. If we wish, we can make a small detour to Vrams Gunnarstorp Castle to visit the beautiful garden. Passing a small moor lake we arrive at our destination, the camping site Hålebäck.

From the campsite we follow the path back into the forest and then in a large arc to the east. Soon we leave the forest and cross the settlement Maglaby, where there are some farms and a stone pit. At the end of Maglabyvägens we cross the road, then keep left twice, then right on Stenestadsvägen. After 700m, turn left onto a trail that takes you through a densely wooded area with many small bends. According to legend, the "forest witch" Johanna Olsdottar lived here in a hut made of brushwood, which was entered through a wardrobe without a back wall. After a total of 11.5 km we have reached our destination.

We leave our camp site in southern direction and follow the signposted hiking trail Maglerödsvägen. We constantly ignore smaller junctions. After about 3 km we come to a fork in the road, here we keep left and continue hiking until we reach the Snuvestuan circuit. A few meters off the path is the Snuvestuan Grotto, where, according to legend, a beautiful forest woman lived who brought luck to hunters. But if she liked a young man, she enchanted him that he could never love another woman again. We walk on through the Wolfstal, where in the middle of the 19th century the last wild wolf of Schonens is said to have been shot. A small detour to the north brings us to the highest point of Schonens, from where we can see Malmö and Copenhagen in good weather. In an arc through the Klåveröd recreation area we finally land at the campground at Svartesjön Lake.

We first hike through dense forest to the northeast until we reach the river Dejebäcken. The trail runs approximately parallel to the river for the next 2.5 km, then we cross it and continue along the Skärån River. Over some steeper hills and viewpoints we arrive at Liagården, a group of farms that worked together until 1962. The ghost of the farmer Johannes Olsson, who was so emaciated by the hard work that he resembled a ghost already during his lifetime, is still said to haunt us here. After the farm had become increasingly dilapidated, it was restored in 2001 and made available to hikers on Skåneleden as a free place to spend the night. We continue on the well-known hiking trail until we reach the village of Röstånga after about 7 km. A little to the east is Jälläbjär, where the cattle of the village once grazed.

From the campground on an old volcanic cone we follow the hiking trail first in a northerly direction. After about 2 km the trail turns right and we reach the village of Anderstorp by keeping left. It was spared by the land consolidation as far as possible and so the houses still stand crosswise along the road. We turn right twice and soon descend into the valley of Rönne Å, the largest river in the area, which used to be mainly used for transporting goods and is now a popular canoeing river. After a short ascent from the river valley we turn to the right and follow the alphalted but hardly used road to the south. After about 4 km we reach our destination, the campground S Hultarp.

We start our hike in a short piece of forest, then we keep to the right on a hiking path. In the forest we come across a small field with the inscription "Karrastenen" (stone of the guys). The young men used to measure their strength by trying to lift the stone. After about 4 km we reach the small village of Hallaröd. Here we visit the sacrificial source and the pilgrimage church of St. Olav, where the medieval pilgrimage ended. Olav II was a Norwegian king who Christianized his empire to unite it. We continue along a fortified road and after 1.5 km turn right into the forest. Past Dagstorpsjön we arrive at Vaxjön Lake, where we notice some early burial sites. Just south of the lake is Skånes Djurpark, a small animal park where we get in touch with the local wildlife. We can spend the night at the Manglebjär campsite.

From the campsite we first walk a few metres south, then turn left. We pass pastures and a short piece of woodland and finally reach the railway line, which we can only cross northwards in an arc. On the other side we walk back south and then follow the alphalted road for a short distance before turning right onto a hiking trail. After about 5 km we reach the spring Onsvalakällan, where according to the stories magical water bubbles. It is said that pagan war heroes used to gather here after their battles to offer sacrifices to the god Odin. Another legend says that a maid had stolen jewellery from her mistress and buried it here. When she came back the next day, however, a spring had formed in the place that was so deep that it was impossible for the thief to fetch her prey. We continue south, past the small lake Misserödsdammen to the campground at Bjeverödsdammen.

From the campsite we first circle the Bjeverödsdammen halfway and follow the trail further south. We walk through light forest and over open fields and cross a road once before we reach a gravel road after about 10 km. Here we keep to the right twice in a row, shortly before the settlement of Ekeröd we have the overnight stay on the left before us.

Right at the beginning we walk a short distance from Ekeröd to the road, then we keep right and cross E22. Nearby there is an old peat litter factory, of which there is still the cable car, some graves and rails and a transport wagon. We follow the road for a few more metres and then turn left onto a forest path. Slowly the building stock is getting denser, there is civilization here only sporadically. After about 13 km we reach our destination, the campground Timan.

The landscape on Linerödsåsen is characterised by peat cutting. On today's tour we pass several large moors where we can still see the old excavation trenches and dilapidated workers' cottages. From the campground we head south. Soon we come to a gravel road, which we follow to the left. At the next junction, keep right, then turn left onto a narrower path. We walk along the edge of the forest until we meet a larger path again that leads us to the Harphult settlement. Continue straight ahead, then the path describes an arc to the south. The forest is slowly getting denser, in the area around Rebbetuaröd we find remains of old farmhouses, a mill and some cellars.

From the campsite we reach the forest road after a few metres. Follow it to the right and along the road until, after 1.5km, it becomes a path. We continue through the forest, past the former airfield Hallabjär. At Agusa we meet the road. We follow it to the south and make a small detour to the half-timbered farm Agusastugan, which is open to the public as a museum. It is only a few meters to the overnight place.

The last 16 km we hike - as before - on gravel paths and paths through the beautiful Schonische landscape. First, the path leads in a northeasterly direction until we reach a road and the church Hörrödskyrka after about 2,5 km. At the crossroads we go straight ahead and follow Lillehemsvägen to the edge of the forest, where we turn right. The small settlements of Torasteröd, Myrestad and Södra Lökarod are the only built-up areas on our route today. Through the Drakamöllan nature reserve and an extensive stretch of forest we walk south in an arc and finally reach our destination Brösarp.

On the E4 from Helsingborg to Åstorp

Parking at the station of Åstorp
Arrival by train, car, foot or bike