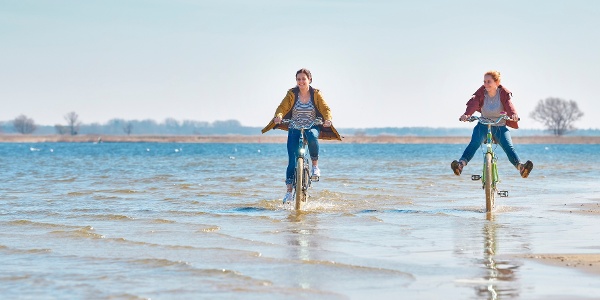 For more variety on the route, there is an alternative route along the coast from Vierow to the seaside resort of Lubmin.

The tour starts in the centre of the university and Hanseatic city of Greifswald. The towpath leads along the course of the river Ryck for 5.5 kilometres to the monastery ruins of the city Eldena, from where it leads 6.1 kilometres on roads to the village of Kemnitz. Past fields and with a view of the Danish Wiek, the route leads on smaller roads 4.3 kilometres to Ludwigsburg Castle. Here it is worth making a first stop and a detour to the nearby natural beach and coastal forest. After another 7.3 kilometres, you will reach the next station, the town Vierow in the municipality of Brünzow. From here, another 4.3 kilometre cycle path leads along the road to the seaside resort of Lubmin. Alternatively, the popular holiday home can be reached via the port of Vierow on a narrow country and hiking trail along the coast. In the seaside resort of Lubmin, we recommend an extensive lunch and bath break as well as a short excursion to the nearby the town Wusterhusen with its idyllic parish garden. Back in Lubmin, the trail continues 8.4 kilometres to the fishing village of Freest. Here begins the last big stage, of 13 kilometers, along the road to the Rungehaus Wolgast. The last stretch is relatively flat and passes the stations Wolgast Dreilindegrund and the harbour Wolgast Hafen before reaching the destination.

Worth seeing on the "Northern German Route of Romanticism":