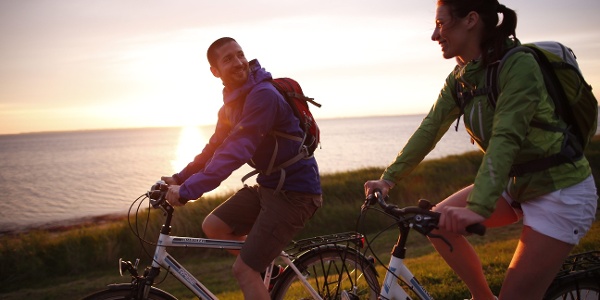 On this various tour on Germany's largest island, cyclists can expect endless sandy beaches, rugged cliffs, charming seaside resorts and picturesque fishing villages. And a lot of untouched nature. Fabulous views lure you to the famous chalk cliffs and on the hills in the interior of the island, you can enjoy wonderful views of the sea and the Bodden, meadows and forests.

Various island: There is a lot to see and experience on Germany's largest island. The impressive chalk cliffs, the green avenues and the viewing platforms of the two lighthouses at the steep coast Cape Arkona are among the absolute favourites of saddle-bound visitors.

In the city Sassnitz, the tour starts on a curvy trip to the traditional fishing port. South of the town Mukran, cyclists pass the flintstone fields. Afterwards the tour continues for 4.5 km along the "Colossus of Prora", a former NVA barrack. Behind it, join the Baltic seaside resorts of Binz, Sellin, Baabe and Göhren, which are famous for their spa architecture, piers and magnificent promenades. The historic narrow-gauge railway "Rasender Roland" has been connecting the seaside resorts since 1895. A fresh breeze blows in the beech forests of the adjoining city of Granitz.

The next section of the tour takes cyclists to the south of the island and the Mönchgut peninsula, which captivates with its unspoilt nature, quiet bays and green headlands. On the way through the peninsula, you can explore the classicistic town of Putbus.

From the community Altefähr, you have a fantastic view of the old town of Stralsund. The UNESCO World Heritage city on the other side of the Strelasund offers a good contrast to the small fishing villages on Rügen's west coast. On the way to the town Gingst, you pass through the almost deserted nature of the island of Ummanz. Here, especially in spring and autumn, numerous shoals of cranes can be observed and the crying and chirping of waterfowl and tidal flat birds can also be heard from everywhere else.

The peninsula Wittow is accessible by ferry for cyclists. The lighthouses at Cape Arkona, in the wildly romantic north of the island, are particularly windy. Not far away, the picturesque fishing village of Vitt nestles in a small bay. Along the almost endless sandy beach, cyclists then reach the highlight of the round tour - the Jasmund National Park. You can admire the famous Rügen chalk cliffs and ancient beech forests of the Stubbenkammer here.