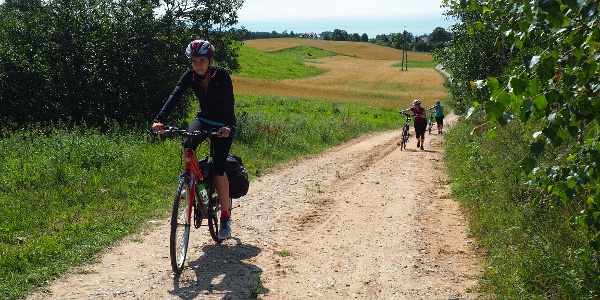 Suvalki Landscape Park is one of the most beautiful places in Poland. It was not by accident that the protection of this place was announced already in 1976. Park Suvalki is the oldest landscape park in the country. The countryside of the Suwałki Landscape Park boasts plenty of elevations and branched ridges separated by deep river valleys and numerous lakes, dominated by the deepest Lake Hańcza.

This landscape was formed by the last ice age, when the layer of melting ice and the power of postglacial waters formed moraine elevations, sand mounds and sediments. The flowing water excavated the Lake Hańcza, which is, with its 103 meters, the deepest lake in Poland. Long after the glacier retreat, huge glacial blocks remained in the valley of the Szeszupa River (which is part of the park), which created picturesque lakeside: Kleszczowieckie and Szurpilskie and others with Szeszupa River flowing through.

Postglacial monuments are the large boulders brought here by glaciers from the Scandinavian mountains and from the bottom of the Baltic Sea, which form extensive rock fields.

Official site of the park

The landscape park is a popular tourist destination, but the network of restaurants and bistros is even thinner than we are accustomed to. We recommend to have enough water and a snack with you.

Swimwear must be part of the equipment. The beautiful clear water in the lakes attracts for swimming. It does not make sense to hold back yourself.

Jeleniewo, parking lot next to the church (215 m)

Jeleniewo, parking lot next to the church

The starting point of our tour is Jeleniewo.

A wooden church dating back to 1878 is worth seeing before leaving. The largest colony of pond bat (Myotis dasycneme) in Poland is nesting in the church.

From the village we head west on the road to Kazimierovka. Here we turn to the local gravel roads.

At Lake Szurpily nobody can withstand the beautiful nature and clear water. You will find several entrances to the lake where reeds do not grow. The water is clear and transparent to a depth of several meters.

At Jeglóvek farmhouse, we will join the Nature trail around the Chateau Mountain for a while. It is one of the most interesting archaeological sites in Poland. There was a heavily fortified fortress of Jotvingians. The ramparts are still visible on the slopes of the hill and at its peak.

We continue along Lake Jeglóveczek. This section of the route is not entirely ideal for cycling because the narrow trail passes through the muddy terrain, but it is only a short stretch. Behind the lake, we will ride on a wide gravel road.

In the village of Wodzilky there is a prayer house of Orthodox Old believers who fled from Russia when the rulers of the Russian Orthodox Church declared old ceremonies and liturgy heresy in 1663. They came to this region in the 17th century. The prayer room is still being used.

From there, our route continues to Bachanowo / Blaskowizna. The local restaurant serves local Kartacze and beer.

The Glazowisko Bachanovo reservation is less than a kilometer away from the village. These are several terraces with stone fields above the Black Hancza River. The stone fields consist of boulders with a circumference of 0.5 - 8 meters. It is estimated that 10,000 pieces are deposited here. The boulders were brought by a glacier from Scandinavia. During the defrosting of the glacier the water took away sand and small stones. Only the largest boulders remained in place.

From the reservation we will take the cycle route GreenVelo through the villages Przelomka and Mierkinie to Old Hancza. In Mierkinie turn to the view point on Hancza Lake.

Old Hancza is the northernmost point of Lake Hancza. Once there used to be a manor house (a mansion and farm buildings), of which only ruins and some landscape features such as water reservoirs or alleys preserved. The farm buildings were destroyed during the First World War when the neighborhood became one of the battlefields of the German and Russian armies. The castle itself survived the Second World War, but in 1946 it burnt under strange circumstances.

Continue towards Smolniky. About a kilometer behind Old Hancza there is a bistro for bikers. We recommend to stop here!

Before you arrive in of Smolniky, one of the glacial walls offers a beautiful view of the glacier-shaped landscape with many lakes. Just get off the bike and climb up to the view point. The place is well marked and panorama description is installed here.

In Smolniky, we turn to the tourist signed route. Field and forest paths are sandy, which can cause trouble for cyclists, and we therefore recommend caution in this section. On the route lies a mill near Udzielek village. The mill is repaired. Nearby is the starting point (kilometer 0.0) of the Szeszupa River kayak route.

The last place on the route is Cisowa Góra (256 m). Cisowa Góra is one of the most beautiful view points in the Suvalki Nature Park. It changed its name many times, even called Suwalska Fudzijama for a while. The shape resembles a volcanic crater, but it is a remnant of the head of the glacier moraine. At the sightseeing plateau on the top is an obligatory cross and a memorial plaque to the pilgrimage of John Paul II.

It’s just last 5 km down the road to Jeleniewo to the starting point.

We traveled on trekking bikes, which is not ideal. Part of the field and forest paths are sandy, and the layer of fine sand is relatively high, so riding sometimes resembles drifting. MTBs with stronger tires are more comfortable.

Repellents and means for insect bite treatment are nice to have. Local people also warn against ticks, but we did not get any in a whole week.