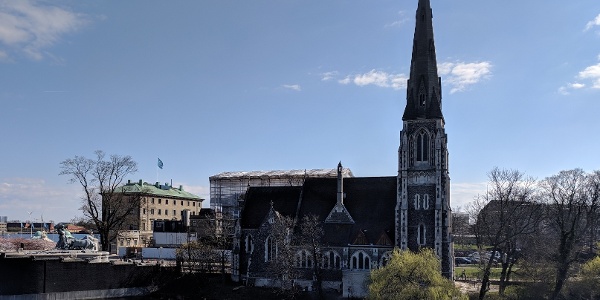 A relaxed ride around Copenhagen; experience the best of Copenhagen by bike while learning about the origins of the city and visiting many of the historical sites and modern architectural masterpeices.

Today's ride is an introduction to Copenhagen taking you around the city centre from the Copenhagen Bicycles shop at the picture-postcard Nyhavn (New Harbour) after your bike-fitting. Follow the waterfront, pass some of Copenhagen's most recent architectural masterpieces including the Royal Danish Playhouse and the Royal Opera House before heading away from the old town to the waterfront to reach the Little Mermaid statue inspired by the work of Hans Christian Andersen. Pedal back towards the old town via Kastellet and continue south to Amalienborg Palace, where you might catch the changing of the guard if you're lucky before heading to the ancient military barracks known as Nyboder. The route also takes you through "The King's Garden" and Rosenborg Palace (a popular spot for residents of the city to soak up the summer sun!) before turning into the Latin Quarter and shopping district. Finish via the Danish Parliament at Christiansborg Palace and the impressive Black Diamond before arriving back to Nyhavn at the waterfront.

Today we provide information on the sites you'll pass (see the Points of Interest displayed on the map or the tips, hints and links section) instead of turn by turn directions so ther's no need to refer to any written route notes on paper while riding the busy bike paths of Copenhagen.  Alternatively, if you prefer you can also walk this route and leave the bikes at your accommodation.

Before starting your ride please inspect your bike for damage to the frame, components or wheels. Ensure that there are no loose cables, that tyres are properly inflated and the brakes are working. Visitors from the UK should bear in mind the brakes may work the opposite way from which you are used to. Always wear a helmet when cycling and if you have any concerns over the condition of your rental bike please call the  bike hire shop or our Macs office using the the number provided in your information pack.

Please beware of traffic wile out on your bike particularly when entering and leaving towns where traffic flow tends to be the highest. Remember to stay on the right-hand side and use cycle lanes where available. Be mindful of other road users, particularly cyclists on the busy cycle lanes in Copenhagen staying on the right-hand side to allow faster cyclists to pass.

Obey local road signs and look out for any change in road conditions.

Nyhavn
Despite the name, the "New Harbour" and was built over 300 years ago by King Christian V. This has always been a busy port pulsating with life though recently gentrified and once home to one of Denmark's most famous exports - Hans Christian Andersen - who wrote several of his famous fairy tales while living in the colourful houses that line the North side of the canal.
https://www.nyhavn.com/home

The Little Mermaid Statue
One of Copenhagen's most famous tourist attractions was inspired by the works of Hans Christian Andersen and his most well known fairy tale. The monument hasn't always been loved by the local populous though. Over the last century the bronze statue has been decapitated twice, had an arm sawn off, and was even decanted to China briefly!
https://www.visitcopenhagen.com/copenhagen/little-mermaid-gdk586951

Kastellet
Here you can cycle through the middle of the citadel along the cobbled street. Founded in 1626, the sight has always been a military baracks and is still used for that purpose today. The traditional barracks are set in the middle of a Pentagon with high protective walls - popular with local runners seeking a green space away from the centre of the city.
https://www.visitcopenhagen.com/copenhagen/citadel-gdk410745

Amalienborg Palace
Home to the Danish royal family, the palace was built in the 1750s. It consists of four identical classical palaces built around an octagonal courtyard with a statue of King Frederik V built in 1771 in the centre. If you time it right you can watch the changing of the guard ceremony here! The palace houses a museum tracing the history of the Danish monarchy over the last 150 years with examples of period state rooms throughout the history of the palace.
Lookout for the flags flying from the roof of the different buidling's. Different flags indicate which members of the royal family are currently in residence at the palace.
http://www.kongernessamling.dk/en/amalienborg/

Marmorkirken
Frederik's Church - popularly known as the Marble Church sits in line with Amalienborg palace and the Royal Opera House. The impressive building has a large copper dome and took almost 150 years to build. Now popular for weddings the church is open to the public and tours of the towers and dome are available.
https://www.marmorkirken.dk/

Nyboder
Considered to be a privileged place to live, Nyboder is impressive for it's repetitive terraced houses with a yellow hue. Some of the earliest houses are still standing, dating from the 1600s. The area was created by King Christian IV to house soldiers from the growing Danish Royal Navy, and many of the properties are still home to enlisted personnel.
https://www.visitcopenhagen.com/copenhagen/nyboder-gdk410757

Rosenborg Castle and Park
The renaissance style castle, built by King Christian IV was the royal residence until the early 1700s and is now home to the royal collection including the Danish Crown Jewels.
http://www.kongernessamling.dk/en/rosenborg/

Rundetaarn (The Round Tower)
This 17th century tower and observatory is another of King Christian IV's many architectural commissions around Copenhagen, and is the oldest functioning observatory in Europe. There are no steps up to the observatory - only a ~200m spiral walkway. This designed allowed a horse and carraige all the way to the top of the 35m tower so that sensitive observation equipment and books from the library could be easily transported, and possibly also because the King didn't wish to climb such a number of steps!
http://www.rundetaarn.dk/en/

Sankt Petri Kirke
As you pedal through the Latin Quarter you will pass the oldest building in the city centre; St. Peter's Church belongs to the German speaking community of the city amd as you'd expect for a 400 year old building it has a fascinating history. Why not visit to learn more?
https://www.visitcopenhagen.dk/da/copenhagen/sankt-petri-kirke-gdk414241

Christiansborg Palace & The Royal Stables
Christiansborg Palace and the seat of the Danish Parliament can be found on the tiny island of Slotsholmen in the middle of the city. This stately palace is used for royal receptions, functions and by the Primeminister for greeting state visitors. This is now where each Danish Monarch is proclaimed. You can also take a guided tour here.
http://kongeligeslotte.dk/en/palaces-and-gardens/christiansborg-palace.html

The Danish Royal Library (The Black Diamond)
One of the largest libraries in the world, the Black Diamond was finished in 1999 and the reasoning behind it's name will become immediately obvious when you first see it. Finished in black granite and glass this impressive structure beautifully reflects the sky and water from the harbour where it sits. The library's interior is equally impressive with a 200sq. metre painting adorning the ceiling and large atrium facing the harbour.
https://www.visitcopenhagen.com/copenhagen/royal-danish-library-black-diamond-gdk412214

There are plenty of places en route to eat and get refreshments - pull up a chair, park your bike, and enjoy watching the world go by.

Today we provide you with information on the top sites in Copenhagen (displayed as Points of Interest on the map and also detailed in the tips, hints and links section) instead of turn by turn directions so there's no need to refer to any route notes on paper while riding the busy bike paths of Copenhagen.

Always be prepared to cycle through a change of weather conditions and check the local weather forecast before cycling. Remember to bring a waterproof jacket and a warm layer particularly as the wind around coastal Denmark can significantly effect the temperature. Gloves (fingerless mitts in summer) are popular to provide some extra warmth and handlebar padding when riding and don't forget a battery pack to provide an emergency charge to any navigation equipment you may be using.