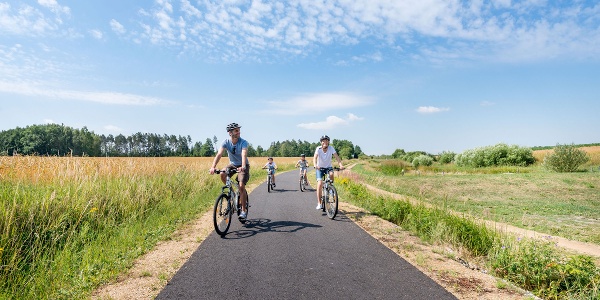 In order to get from one track to another, the routes are linked via light traffic streets and paths to which in part the two top cycling paths lead: the Kamp-Thaya-March-Cycling Route and the Iron Curtain Trail (Euro Velo 13).
more
Show less
Difficulty
easy
Technique
Stamina
Experience
Landscape
Highest point
597 m
Lowest point
402 m

The 5 legs of the Thaya tour:

2. Raabs an der Thaya – Slavonice
Ca. 31 kilometers (96% paved, moderate inclines): 2/3 of the route in the Czech Republic are on the light-traffic country road 409 together with cycling paths 48 and 26. The city of Slavonice and the Jewish Cemetery in Písečné are recommended sights.

Free itinerary folders and brochure are available from Waldviertel Tourismus and Zukunftsraum Thayaland.
All books and maps