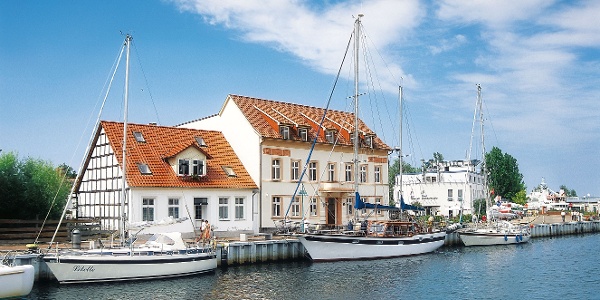 From Germany's capital to the sunny island

While the fine society travelled with the steam locomotive to the magnificent seaside resorts in former times, nowadays more and more connoisseurs are drawn to the north on their bikes. Not only the unique coastal landscape, but also the way to the island paradise, with its endless beaches, is a fascinating experience of nature.

An evening stroll along the 8.5 km long promenade connecting the baltic sea resorts of Ahlbeck, Heringsdorf and Bansin.

In the south of the island of Usedom, the route follows some dirt tracks through woods and fields.

The 350 km long long-distance cycle route starts in the centre of Berlin. To the south, the route leads out of the city into nature, past lake Werbellinsee, one of the most beautiful lakes in Brandenburg, through the Schorfheide-Chorin biosphere reserve to Prenzlau and Mecklenburg-Vorpommern. Along the river Uecker, we continue through the nature park "Am Stettiner Haff", which captivates with its multitude of birds and butterflies and an idyllic landscape. In the north of the city Pasewalk, forests of birch trees, pine trees and blossoming heather dominate the landscape.

The imposing castle tower of  the town Ueckermünde welcomes its visitors and leads them right into the old town. A colourful bustle of passenger ships, fishing boats and sailing boats invites you to take a break with its maritime flair. To the west of Ueckermünde, traditional fishing villages alternate with fine sandy beaches.

The cyclists pass the city Anklam before they reach the sunny island. Here, in the birthplace of flight pioneer Otto Lilienthal, the museum of the same name is well worth a visit.

Crossing the unspoilt hinterland of the island of Usedom, it quickly becomes clear why the island was declared a nature park. The promenade between the three imperial baths of Ahlbeck, Heringsdorf and Bansin also impresses with its incomparable charm: elegant villas in the style of spa architecture, impressive piers and the longest beach on the Baltic coast can be admired here.

At the narrowest point of the island near town Lüttenort. you have a wide view of the Achterwasser. The painter Otto Niemeyer-Holstein had his studio and house built here, amazed by the fascinating landscape.

Via the motorway A24 to Berlin