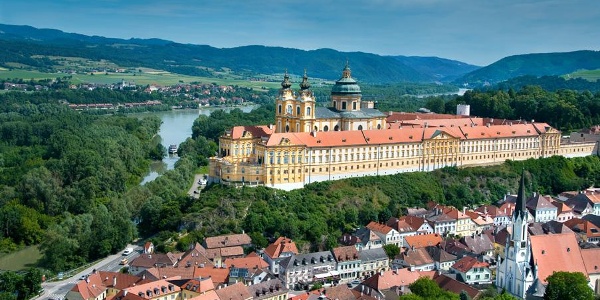 Along this section of the scenic Danube Bike Path, you ride from Melk, the western “Gateway to the Wachau”, along the Danube to the historic city of Mautern, which played a major role in Ancient Roman times. On your ride, you pedal through the lovely Wachau and towns such as Schönbühel, Aggsbach and Rossatz-Arnsdorf.

This stage takes you by the Dunkelsteiner Wald, one of the biggest contiguous woodlands in Middle Europe. The advantage of the route on the south river bank is the sweeping view of the grand landscape of the Wachau, a UNESCO World Heritage landscape on the opposite bank. It has enchanting wooded slopes interspersed with rocks, terraced vineyards and amiable villages. Before leaving Melk, the “Gateway to the Wachau”, behind you, make sure to visit the Benedictine Abbey of Melk, founded 1089, with its magnificent library of 85,000 books, a ceiling fresco by Paul Troger and a fragment of the Lay of the Nibelung.

This old epic reminds you just how steeped in history this area is, a fact also attested to by prehistoric finds in Schönbühel. You pass through this town with its charming castle on the bank of the Danube on your way to Aggstein. There the legendary 12th c castle ruins of the same name entice you to climb 300 meters up the steep hill. The robber-baron Jörg Schenk once resided here. He forced the ships on the Danube to stop and pay him a toll. Those who failed to do so were put on a high rock ledge within the fortress called the Rosengärtlein (Garden of Roses) and left to starve to death.

Relax and simply enjoy the scenery until Mautern. Along the way, you encounter villages graced with charming churches and old wineries and farmhouses. Near Bacharnsdorf, you see the remains of fortifications that formed part of the old Roman limes along the Danube, now incorporated in buildings and gardens.

Your tour along the south bank of the Danube begins in Melk, also known as the western gateway to the Wachau Valley. This landscape shaped by human hands is on the UNESCO World Heritage list and is known for its lush green hills with steep slopes covered by countless vineyards. The town itself is worth a trip. It is home to Melk Abbey (described as the most symbolic and dominant of all Baroque structures) and also to the Stiftsgymnasium Melk (the abbey school), the oldest surviving school in Austria.

This great start puts you in the perfect frame of mind for the rest of the tour. You cycle most of the stretch downstream on the B33, getting off only in certain places. First you pass through the villages of Schönbühel an der Donau and Schönbühel-Aggsbach and enjoy the beautiful flora and fauna of the Wachau. This section of the Danube is not only part of the world’s cultural heritage and one of the most enchanting valleys in Europe but also an internationally renowned wine-growing region and a favorite destination for connoisseurs. It has cultural treasures and scenic nature that make it well worth a visit for anyone. Just beyond Schönbühel-Aggsbach is Aggstein, a true delight for lovers of ancient castles and fortresses. The imposing Aggstein ruins are perched on a green hill to the right.

Then you move on from the old fortress ruins, riding on the main road to St. Johann im Mauerthale. There you turn off onto the Danube Bike Path and cycle directly along the Danube. With stunning views of the Danube bend in Spitz, you do not get back onto the B-33 until Bacharnsdorf. Then you continue until you reach the Danube bend in Rossatz-Arnsdorf and in St. Lorenz where you leave the main road and cycle through Rührsdorf and Rossatz-Arnsdorf. You will see historic parts of the Danube limes from Roman times.

Shortly thereafter you return to the B33 and get closer and closer to your destination. At Hundsheim you leave the road for the last time and pedal your way to your destination, the town of Mautern an der Donau. Culture fans have a treat in store for them here, as Mautern has a long history extending back to Roman times and has many finds from this period. This lovely town makes for a fine end to the day – and to your tour.

You can reach Melk easily by train.

In Melk you change from the A1 to the B1 and continue into the city center of Melk.

There are a number of parking lots in the city.
Arrival by train, car, foot or bike