Back
More places to visit 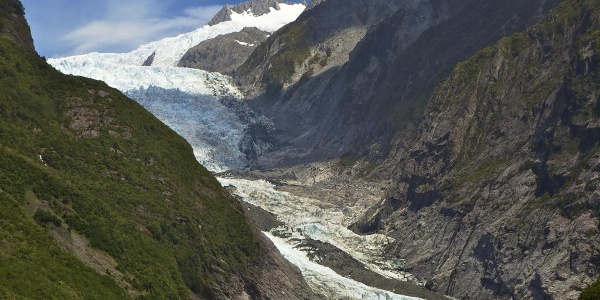 The glacier lies on the edge of the New Zealand Alps and is only 15 km away from the Tasman Sea. At the time of its greatest expansion about 150,000 years ago, the glacier not only included the famous Mount Cook, but also calved directly into the sea. Nowadays, the Franz-Josef Glacier still reaches a height of 400 m above sea level. This makes it one of the lowest glaciers in the world. This geological peculiarity makes it one of the most popular excursion destinations on the South Island of New Zealand. Not many glaciers in the world are as easily accessible as the Franz-Josef Glacier. But it is also affected by the worldwide melting of glaciers: The first time it lost over 3 km in length was between the end of the 19th century and 1982. It was then able to gain 1.2 km before melting again in 1999.

There are several ways to get to the glacier. The easiest is one of the numerous hiking trails leading to the foot of the glacier. For true glacier enthusiasts, guided hikes are also available. Here you can basically choose between two versions: on foot or by helicopter.