Request Book from €919.00 · directly at the offerer
Back
More Offers 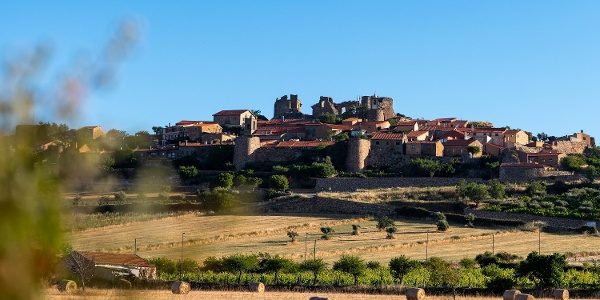 The Bike Tour Center Based in the Portuguese Historical Villages is a label “Clean & Safe” self-supported bike holidays adventure with the label “Clean & Safe” and the “Less is More” policy. This means that we had in mind a safer and relaxed way for our customers to make their holidays in Portugal’s countryside, avoiding the crowds, with a center-based trip only with two lodgings.

The beauty of this Bike Tour allows to cycle in locations of elevated historical nature. Find many ancient villages spread in Portugal’s center, each one more surprising than the one before, such as the Portuguese Historical Villages of Figueira de Castelo Rodrigo, Almeida, or Marialva. The organization provides tools that make the adventure possible, integrated into a follow-up structure, guaranteeing information, and security services.

While crossing such mesmerizing landscapes you will find these castle villages at the end of the day, after going through perfect desert roads or ancient trails that lead to the top of the hill. This center-based group of loops starts in two different locations along the week, Figueira de Castelo Rodrigo and Juízo, and it goes through some of the most impressive Portuguese natural regions like Côa Valley, with their cave paintings, or Faia Brava, the first private conservation area in Portugal.

Get the train along the Douro Railway until Pocinho (about 3 hours).

Private transfer from Pocinho to Castelo Rodrigo (about 45 min).

Immerse yourself in a medieval experience among the Castelo Rodrigo’s historical village walls, local of exceptional historical interest for the remarkable monuments it holds. Walk the narrow cobbled streets and visit medieval references such as the Mother Church or Palácio Cristovão de Moura’s ruins.

The first stage will take you to some of the paths of ancestral traces where important battles were fought throughout history, based on the bravery of its people, led to the independence of Portugal. On this day, you will have the opportunity to rediscover the charms of the rural world through almost deserted roads surrounded by agricultural fields.

When you reach the third stage, you will continue by bicycle through typical Beirã villages such as Vale do Afonsinho, Algodres and Vilar de Amargo while you look at the beautiful landscapes of cultivation by secondary roads. Vale de Afonsinho holds one of the ancient rock art centers of the Côa Valley, this valley classified by UNESCO in 1998 as a World Heritage Site.

Leaving Castelo Rodrigo behind, today you will pedal towards The village of Juízo.

You'll have the chance to visit the village of Penha da Águia, with a beautiful “Igreja Matriz” - Mother church -, the graves carved in the rock and the various sources stand out. The Côa river, the castle tower and the eagle-shaped baroque are places of scenic interest.

A small climb is the next smooth challenge until Cidadelhe.

Part of Cidadelhe is classified as a UNESCO World Heritage Site, due to the rock figures, engraved in granite, dating back to Prehistory. Cidadelhe belongs to the Vale do Côa Archaeological Park area and sits on top of a hill, over 500 meters high, between the Massueime and Côa rivers. It was the writer José Saramago who called Cidadelhe the “heel of the world”, because it is located at the northern end of the municipality, and thus became known.

Its view of the Côa Valley is capable of leaving us speechless, at the top of the mountain. It is very close to the beautiful Aldeia do Juízo, where you'll overnight.

Departing from Juízo, you will continue your journey passing by the Historical Village of Marialva, which takes you to the deepest roots of the country's history in a scenario that reveals one of the living relics of Portuguese ancestry.

The streets are lined with buildings that have stood the test of time and lead to the citadel surrounded by walls in whose ruins it is easy to lose track of time. You'll return to Juízo through some beautiful roads in this region, where the surrounding nature is in a pure state and where some of the country's deepest cultural roots are found.

Transfer from Juízo to Pocinho Station.

Get the Train from Pocinho to Porto city.

Transfer from Juízo to Pocinho Station

GPS tracks (using the app "Ride with GPS"  on your phone)

Transfer from Juízo to Porto airport: 240€

Transfer from Juízo to Lisboa airport: 290€

Extra night in Lisboa: On request

Upgrade to electric bike: plus 168€/person

Visit to Palaeolithic rock engravings in the Côa valley: 40€/person

Pack Handle bag and pannier bag rental: 12€/person (the trip includes one of these pieces)