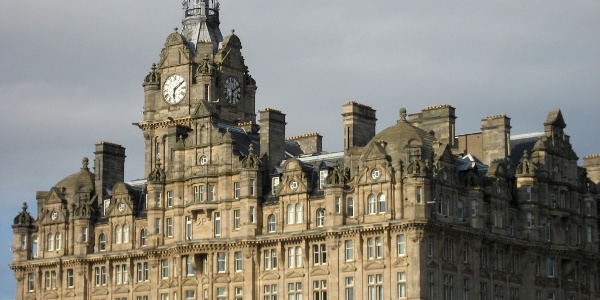 The Balmoral Hotel, formerly known as The North British Hotel, is one of the luxurious hotels in the Scottish capital.

The imposing building is designed in Victorian style with influences of Scottish Barony style. The hotel, built for the North British Railway Company, was opened in October 1902, closed for renovation in the late 1980s and reopened in 1991 by the famous Scottish actor Sean Connery. "Balmoral" is Gaelic and means "majestic apartment". The hotel has been run by the Rocco Forte hotel group since the mid-1990s. The hotel's clock, which has been running three minutes early since 1902, is particularly well known, so that city dwellers don't miss their train. Only on the last day of the year does the clock show the right time.

Celebrities such as the comedian duo Laurel and Hardy, Michael Palin and J. K. Rowling already stayed at the Balmoral Hotel. The author of the Harry Potter books even wrote some chapters for the well-known series. In January 2007 she finished the last book in room 552. The room was then renamed J. K. Rowling Suite and shows on a marble bust of Hermes the sentence she left "JK Rowling finished writing Harry Potter and the Deathly Hallows in this room (552) on 11th January 2007".

Over Carlton Hill to Broughton

April 17, 2020
easy
0.5 km
0:09 h
10 m
6 m
It is only a five minute walk from Waverley Station to the Scottish National Gallery. The best route is to leave the station by the ramp then walk ...
from Transform Scotland,   Transform Scotland
Bike Riding · City of Edinburgh

April 17, 2020
easy
0.5 km
0:04 h
10 m
6 m
It is a very short distance from Waverley Station to the Scottish National Gallery. The best route is to leave the station by the ramp then cycle ...
from Transform Scotland,   Transform Scotland
Bike Riding · City of Edinburgh