This walk, facing the Magadino plain, boasts several points of interest: a long trail among vineyards and wineries offering some of the best Merlot from the Ticino area.
media
7,9 km
3:00 h.
778 m
782 m

A visit to the old and beautifully restored housing cluster of Curzútt, testifying to the time when daily life mainly revolved around hillside activities; discovery of the Romanesque church of San Bernardo, featuring a number of beautiful frescoes and, finally, the thrill of crossing one of the longest Tibetan bridges in Switzerland (270 metres).

The trail begins through rows of vineyards and chestnut woods offering magnificent views of the Magadino plain and Lake Maggiore, which can be glimpsed in the background. After passing through several small settlements and following the signs to Curzútt, you will reach a Tibetan bridge that connects the hill of Sementina to the one above Monte Carasso.

To explore the route, we recommend buying the official maps of the Federal Office of Topography Swisstopo. In addition, the following website map.geo.admin.ch offers constantly updated data.

Montagnepulite: This project was born to promote an effective management and sustainable use of mountain huts in Ticino, and in particular the litter management. The responsible management of litter in the mountains is a matter of common sense. We can all contribute: https://www.montagnepulite.ch/en/golden-rules

The trail begins through rows of vineyards and chestnut woods offering magnificent views of the Magadino plain and Lake Maggiore, which can be glimpsed in the background. After passing through several small settlements and following the signs to Curzútt, you will reach a Tibetan bridge that connects the hill of Sementina to the one above Monte Carasso.

Of breathtaking scenic impact, the bridge measures 270 metres in length and is suspended 130 metres above the creek below. A walkway with larch boards, a safety wire mesh on the sides and a handrail make crossing it much easier and safer.Continuing in the direction of Curzútt, the trail will lead you right up to the Romanesque church of San Bernardo, which stands in a clearing in the woods. Though seemingly isolated, it was once an active part of village life. Its origins date back to the late eleventh century. The interior is architecturally simple, but rich in 14th and 15th century frescoes covering virtually all of the walls. The painting of the Last Supper is especially interesting owing to the fact that the artist featured local products, including freshwater crabs and cherries on the table. Should the little church be closed, you will find its keys a little further, in Curzútt, at the hostel.

The old cluster of Curzútt, situated at an altitude of 600 metres, lies just a short distance from the church and boasts a top-notch restaurant. In past centuries, people did not live on the plains as they do today, but rather on the hills. This, not only because the Ticino River frequently overflowed, meaning that those living along its banks were at a greater risk of contracting malaria, but also to avoid the raids of armies vying for Bellinzona, an important access route to the Alps.In recent years the beautiful housing cluster of Curzútt, with its stone buildings, gardens, and terraces planted with fields of grain and vineyards, has been beautifully restored by the Fondazione Curzútt - San Barnard thanks to a significant investment (6 millions Swiss Francs).

The restoration was not intended to create an open-air museum, but rather a lively centre that now boasts a hostel and a top-level restaurant. Several buildings, stonewalls and the old mule path have been renovated with other on-site amenities including a delightful playground for children. 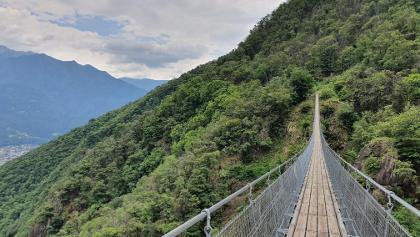 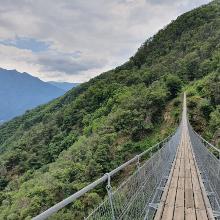