How Monument Valley became the epitome of the Wild West

Responsible for this content
Outdooractive Editors Verified partner
Everyone knows the sight – the reddish desert with its towering, imposing rock formations, popular as a photo motif with the road leading to it: Monument Valley. Today the plain on the border of Utah and Arizona is a popular excursion destination and appears in many people's minds as the image of the Wild West.

Millions of years ago the famous red plain with its specially shaped rocks reminiscent of mittens, elephants, camels, dragons or a totem pole was created. Originally the Anasazi lived in the area, but for unknown reasons they left in the 13th century. Later, the Navajo arrived and settled in Monument Valley.

The idea of Harry Goulding

Harry Goulding and his wife Leone, called Mike, came to Monument Valley in 1921. The shepherd had purchased a piece of land and lived in a tent with his wife for the first few years. They set up a trading station where the local Indians could exchange their cattle and handcrafted goods for other commodities that were hard to come by in the area. The Gouldings were interested in the welfare of the Navajo people and were popular with their neighbors and known for their honesty. In 1928 they were finally able to build a house in which they lived and established their trading center.

Utah
The Monument Valley Museum was opened in 1989.
by Wiebke Hillen,   Outdooractive Editors

With the economic crisis, jobs were scarce and life hard in the 1930s. When the Gouldings heard that the famous John Ford was looking for a location for his new film – a Western – they set off for Hollywood. In their luggage they had some photos of their friend Josef Muench from Monument Valley. Somehow they managed to get through to the director and present their photos to him. Ford didn't think a long time – the same month the actors and the film team travelled to Monument Valley. The new backdrop for the film was found and was to shape the image of the Western and the Wild West to this day. 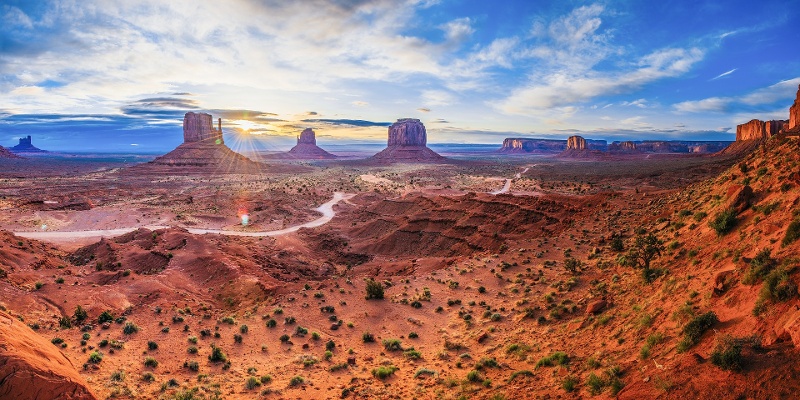 Monument Valley as a movie star

John Ford shot a total of nine movies in Monument Valley, the first one was ”Stagecoach” with John Wayne in 1938. After that he and Wayne returned several times to connect the image of the Wild West in the heads of the cinema audience with Monument Valley.

The American settlers did not come to this area of the Navajo, but it stands as a metaphor for the conquest of the country and perhaps like no other area for the American West. In Ford's films, the Navajos took on the roles of the Apaches and Comanches and the entire film crew had to be supplied – creating jobs.

Even today, Monument Valley and its residents live from the aftermath of Ford's films: over 450,000 visitors a year come to experience the Wild West. Famous rock formations such as the Mitten Buttes and the Merrick Butte are located in what is now Monument Valley Navajo Tribal Park, accessible to all. However, guests can get a deeper insight with a Navajo guide, who leads to the best vantage points and can give interesting details about the country.

Ford's films were of course not the only ones to exploit the new potential of Monument Valley. Other westerns like ”Once Upon a Time in the West” used the area as a backdrop, but also other well-known movies like ”Easy Rider”, ”Back to the Future 3”, ”Forrest Gump” or ”Indiana Jones and the Last Crusade” were partly shot here. Also music videos and commercials were recorded in Monument Valley and so it became one of the most popular destinations in the USA, but especially the epitome of the Wild West – even if it didn't take place in this form. 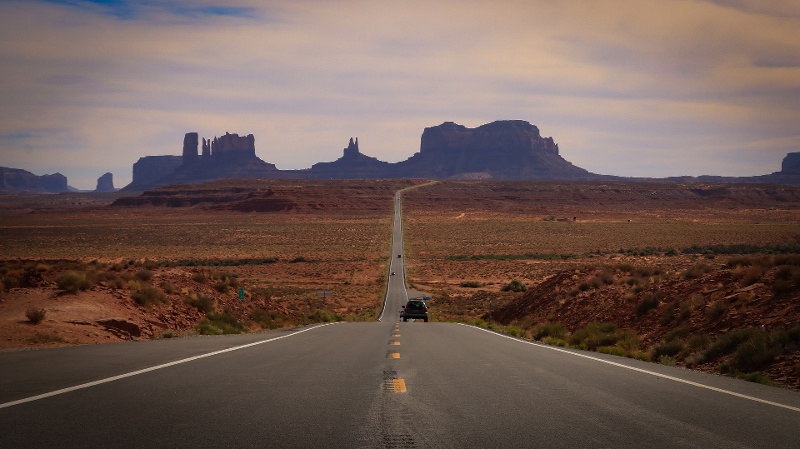 The Mittens and Merrick Butte