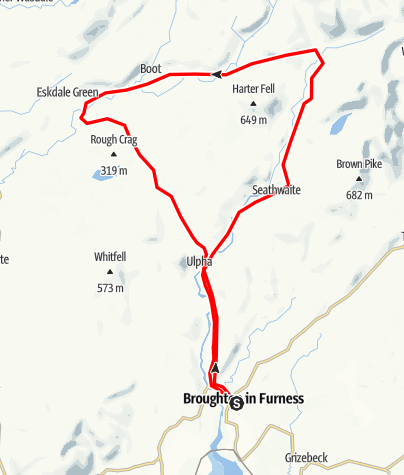 THE LAKE DISTRICT'S HIGHWAY TO HEAVEN

Follow Wordsworth and the Romans between the mountains towards the sea

THE LAKE DISTRICT'S HIGHWAY TO HEAVEN

Follow Wordsworth and the Romans between the mountains towards the sea

As man-made marvels go, a sliver of tarmac hardly cuts the mustard. But consider that it's England's steepest road and follows the route of a 1900 year old Roman course and the monika seems more justified. Add to this its situation, over a high, rocky col on the southern fringe of England's highest mountain massif, Scafell, and the superlative fits more easily. Completing the jigsaw are some of the most impressive views from any English highway. The route over Hardknott Pass to the delightful West Cumbrian countryside is every inch a wonder. It's a glorious drive, one for confident drivers prepared for precipitous, single-track lanes.

1) Broughton-in-Furness is base for this splendidly scenic drive away from the crowds. The main A595 road to Whitehaven is left behind at Duddon Bridge lights (turn R for Ulpha and Seathwaite), the start of a beautiful journey up Dunnerdale, Wordsworth's personal paradise. Crimped between crinkly hills and the wooded depths of the Duddon Valley, the thin road reaches tiny Ulpha where signs for Seathwaite confirm the way. Allow a stop at Seathwaite where the compact church was one of Wordsworth's favourites, and the slate flooring of the Newfield Inn is an amazing rainbow of colours.

Heading north; the valley closes in, hemmed-in below stately Harter Fell. It's a challenging landscape of stark crags, oakwoods and fir plantation, dotted with a few sturdy farmsteads huddled against the brooding heights. A worthwhile stop is Birk's Bridge car park, where a short stroll finds the eponymous bridge, leaping over chasm, falls and cataracts created by the vigorous Duddon. Advance then to reach Cockley Beck's remote farmhouse and a junction of ways beyond a cattle-grid.

2) In a magical setting ringed by crumpled hills, this is just a little way from the Three Shire Stone, where the traditional counties of Lancashire, Cumberland and Westmorland met. The road R slides along Wrynose Bottom's stunning glaciated vale to the pass through to Ambleside. Our way heads sharp-L over the sturdy pack-horse bridge towards Eskdale. Select crampon-drive on the gearbox and commence the ascent of Hardknott Pass, here joining the route forged by the Romans.

There are a few stony pull-offs beside the carriageway, but don't park in any of the tarred passing places. It is worth pausing, though, to look back along Wrynose Bottom, one of the wildest views on any English road. A series of increasingly steep switchback bends take the lane heaven-wards at a startling 1-in-3 gradient, criss-crossing lively becks to top-out at a cairn with a few parking spaces not far away.

3) Now engage anchor-drive and coast towards the descent into glorious Eskdale. Maybe 600yds after the sharp hairpins is a gravelly parking area on the R, above which is the astonishing site of Hardknott Roman Fort; boards here interpret features. Reaching the foot of the pass, the road advances past a couple of welcoming inns to reach Dalegarth Station on the wonderful La'al Ratty narrow gauge railway. Take a short ride; or turn off L by the nearby war memorial to woodland parking and adventurous paths to the spectacular Stanley Ghyll Falls.

4) A further 1½ miles west, at the King George IV inn, turn L for Ulpha. This lane presently climbs energetically across Birker Fell. A final stop is to park at a lonely junction signed L for Stanley Ghyll at a magnificent mountain panorama. Walk R here ¾ mile along the rough track to the haunting, infinity-pool tarn of remote Devoke Water; then continue south along the superb moorland road to Ulpha, thence Broughton's homely pubs.

Drive is c.32 miles long, much of it on single track lanes with passing places.

4 pubs along the way (all open by 11am), plus a café at Dalegarth Station.