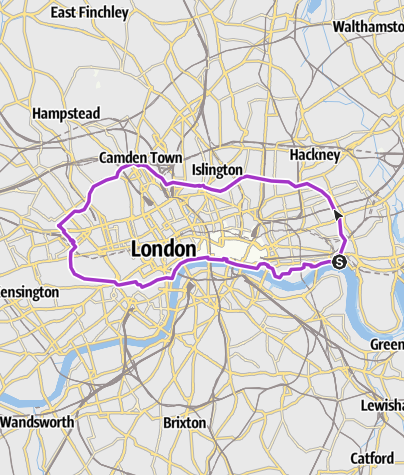 Part of the canal towpath is closed off to public due to the upcoming Maida Tunnel, choose the road overlooking it on either side

King's Cross redevelopment has transformed the next stretch with superb conversion of an industrial area. Look out for Coal Drops yard, the gasometer flats, and Central St Martin's

The canal continues into 886m Islington Tunnel, with the towpath route following waymarker plates above

From here, the north bank of the Thames can be followed back to Westminster, on the way though the remains of London Docks can be seen

At Shadwell Basin (immediately after the red brick Rotherhithe Tunnel ventilation shaft), skirt around the outer edge of the basin

Heading west following the water stream, there is the small park Wapping Woods which covers half the infilled East Basin of London Docks

The water feature continues dropping down cascades along Tobacco Docks and under a swing bridge marking the entry into the infilled West Dock, the original wall is on the opposite side of the water feature on the final straight

Finish the route by following the river and cutting through London's parks (some slightly more serene bodies of water!) to get back to Paddington