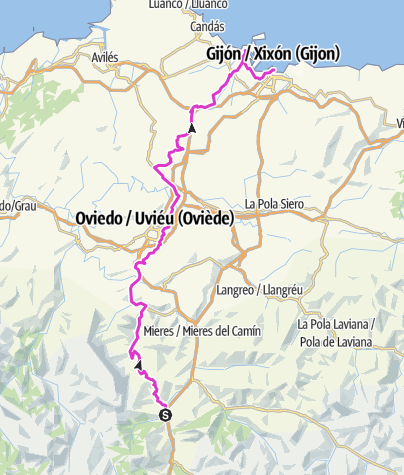 The Vía de la Plata is an alternative route, or secondary itinerary, of the pilgrimage to Santiago de Compostela. It crosses the west of Spain from south to north, starting in Seville, and passes through 4 regions (Andalusia, Extremadura, Castilla y Leon, Asturias) and 7 provinces, over a distance of about 800km. The route follows an ancient Roman road, built to facilitate the gold trade.
The Spanish State and local authorities have enhanced the value of this route by making it accessible for cycle tourism and mountain biking, to our great delight. Here we present the route in 12 stages (the route differs depending on whether you are on a road bike or a mountain bike).
difficult
Distance 79.8 km
Duration6:40 h
Ascent1,297 m
Descent1,613 m
Highest point796 m
Lowest point0 m
Stage 12 (road bike): from Pola de Lena to Gijón
Soon after leaving Pola de Lena, we attack the difficult ascent of puerto del Cordal, via the Soterraña. From the heights, the Riosa valley opens up below us, with the Cordal de La Gamonal and its mythical Angliru cycling climb.
We then enter the lands of Morcín. We return to the N-630 and the Caudal River through the narrow Peñamiel gorge and then, on the heights of El Caleyu, we turn to the right. We are in the central plain of Asturias, known as the Oviedo basin. After climbing a little to the top, we dominate the road network.
We skirt around the Areo mountain, an esoteric place that has been little studied, and arrive at its extreme north, el cabo Torres. What today we call Campa Torres was once a high place of the Roman Empire.
We finally reach the first neighbourhoods of Gijón, we follow the cycle path to the Main Square and the Campo Valdés, site of the Roman baths, at the feet of Octavio, who gives us his imperial greeting with his raised bronze arm.
This is the end of our beautiful journey from the South to the North of Spain, in the footsteps of the Romans.