We start at the market church in Bad Langensalza. Follow the "Marktstraße" and then turn left into "Rathausstraße". This one becomes the "Lange Straße". After a few metres, we turn left into the street "Beim Barfüßer" and continue on the "Steinweg" and "Bahnhofstraße". In front of the station of Bad Langensalza, we turn left, via the "Steubnerstraße", to the "Gothaer Landstraße". We cross this one half left and then turn into "Hannoversche Straße". In a left curve, we turn right.

We go into Aschara and go through the whole village on the "Hauptstraße". At the exit of the village, turn left into the field path "Ascharerer Weg". To the right, immediately to the left, the field path follows a federal road after a right bend. We follow this one to the left for a little while and turn to the left into a farm road at the next occasion. At the next turning, turn right to Westhausen.

In Westhausen, turn left at the "Hochheimer Straße" and then turn right again into "Kirchstraße". Then take the "Hauptstraße" to the right and then turn left into "Feuergasse". We go to the village of Warza. We cross the village along the main road. Shortly before the exit, turn right into "Remstädter Weg". After a left bend, continue straight ahead to Remstädt.

In Remstädt, we go on the "Warzaer Straße" to the "Oststraße". Turn right here and turn left again into "Hauptstraße". The road becomes "Am Furtfeld". At the exit, turn right after a pond and then turn left again into the "Heutalsweg". Via the "Rennstädter Weg", we reach the centre of Gotha. We cross the "Gartenstraße" and come across the "Lutherweg" and "Marktstraße" to the "Hauptmarkt", our destination.

Bad Langensalza can be reached by bus and by train. Information on timetables and routes can be found on the website of Bad Langensalza.

Bad Langensalza is connected to the long-distance network via the federal roads B84, B247 and B176. The closest federal motorways are the A4 and A71.

Giovanni Casselli, Thomas Dahms: Via Romea, Pilgerführer Stade - Mittenwald, Ostfalia-Verlag, Osterwieck, 2015. The entire pilgrim trail of the VIA ROMEA in Germany is described in 12 areas and in daily stages. Including general maps, instructions where to go, images and advice concerning sights and things worth seeing on the route. Order possible at: www.ostfalia-verlag.de 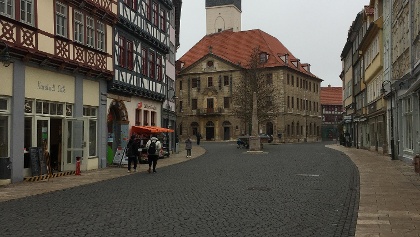 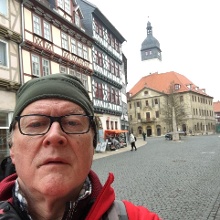 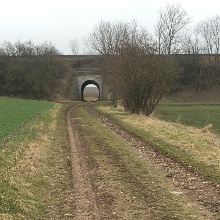 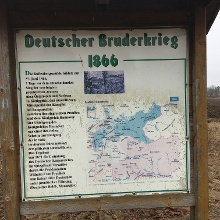