These four rock heads are visible from afar and form the most striking mountain scenery of the Sauerland region. At the same time they are a testimony to ancient volcanic activity, a refuge for rare species and an impressive cultural monument.
difficult
3.1 km
1:15 h
194 m
194 m
Four large porphyry rocks jut out over the treetops of the forest. Each of the mighty volcanic rock cones has its own name: the southernmost rock bearing the summit cross is the Feldstein (45 metres high), to the northwest stands the Ravenstein (72 metres), to the north is the lowest-situated rock called Bornstein (92 metres) with the adjacent Goldstein (60 metres) to the east.

Despite its small size, the area of the Bruchhausen Rocks is classified as a nature reserve, an FFH area and a bird sanctuary. Moreover, it is recognized as a top-ranking site of archaeological and cultural interest, and as an archaeological reserve, because among the rocks there is a prehistoric circular hillfort and place of worship that dates back to around 500 BC.

Special bird species at the Bruchhausen Rocks are Eagle Owl and Peregrine Falcon, both of which were once extinct in Nord Rhine-Westphalia but now breed at the rocks again. The nocturnal Eagle Owl, the largest owl species in Central Europe, is rarely observed. However, as the Peregrine Falcon is active by day, it can be seen well in the area.

Special plant species also grow on the Bruchhausen Rocks. However, glacial relicts such as the Alpine Rock Cress and extremely rare species of moss are not very conspicuous plants.

Please observe the safety notices around the area

On the signposted circular trail, you walk past numerous information boards. A small map is available at the information centre.

For people with limited mobility, it is advisable to start from the highest panorama car park, from which a signposted footpath that is suitable for wheelchairs and prams/pushchairs leads up to the the Feldstein (Stiftung Bruchhauser Steine 2007).

You can climb up the Feldstein from the southeast via natural rock steps (not accessible for wheelchairs etc). From the 756-metre-high summit you have a wonderful view, which in good weather may even extend as far as the Teutoburg Forest.

The closest bus stop is called "Bruchhausen, Unter den Steinen" (about 10 minutes’ walk to the starting point of the trail).

Coming via district road 47 from the direction of Olsberg or Brilon/Willingen, the approach road to the Rocks is signposted at the start of Bruchhausen Village. After 500 metres you reach the lowest parking lot at the Information Centre. There you can pay your parking fees and admission to the area, and visit the small, fascinating exhibition about the area. For opening times and prices, please visit www.stiftung-bruchhauser-steine.de.

You can find free car parking in the village of Bruchhausen; you will then have to make your way to the Information Centre on foot. 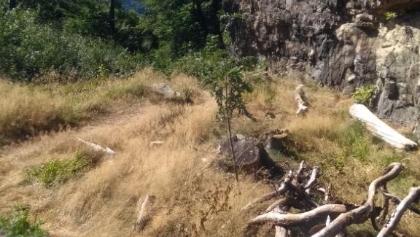 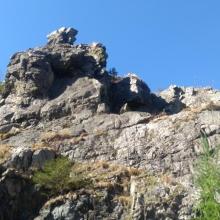 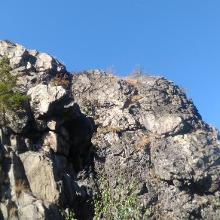 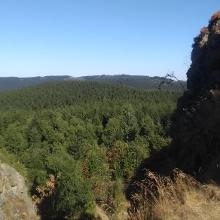