Responsible for this content
StädteRegion Aachen Verified partner  Explorers Choice
On the trail of a political artefact Kelmis, Moresnet, Three-Country Point, Preuswald and Hergenrath – this hike follows the trail of history of this curious corner of Europe, roughly mapped out on the border of the one-time microstate Neutral-Moresnet.
moderate
Distance 19.8 km
Duration5:30 h
Ascent358 m
Descent358 m
Highest point332 m
Lowest point166 m
The hike begins from Hergenrath (municipality of Kelmis), heading south to Eyneburg Castle. The only surviving hilltop castle in the Eupen region was originally the seat of an order of knights, the Van Eynebergs. Colloquially it is also known as “Emmaburg” (or “Emma Castle”) because according to local lore Emma, a daughter of Charlemagne, trysted with her lover Einhard here. The individual sections of the structure date from very different eras: the keep was founded in the 14th century, while the inner castle was built between the 15th and 17th centuries. Its present form dates from the late 19th century. In more recent years, Eyneburg has established itself as a location for medieval festivals.

Continuing on, the hike offers a beautiful view across Kelmis with the Casino pond in the foreground. The water reservoir here was originally built for the nearby Galmei mine, to wash the extracted ore with the mine water. The area around the pond and the former spoil tip features a unique variety of vegetation. The very rare “Galmei flora” thrives on soil rich in heavy metals.

Heading south from Kelmis, following the course of the Göhl, you make your way to the village of Moresnet. But before you get there, the Rochus Chapel is worth a brief stop. At the confluence of the Lontzener and the Grünstrasser, you pass this tiny chapel, the origins of which go back to the 16th century. It is dedicated to Saint Rochus, patron saint of plague victims. In the 17th century, at the behest of King Philip of Spain, public land here was sold to finance the hiring of a curate, whose task was to hold a daily mass either in the chapel or on the mine site. According to legend, the 400-year-old Linden tree at the chapel is a “tree of life” with powers of protection.

Moresnet is a small village west of Kelmis, made up of picturesque traditional quarry stone houses. The village is built with the Church of St. Remigus at its centre; historical references to Moresnet begin in the year 888. Going back to the time when individual noble families maintained their own dominions, there have been at least three manor houses established here: Schimper Castle, Alensberg Castle and Bempt Castle. Of these, Bempt Castle is the only one that survives.

The hike continues towards Preuswald. Part of this section follows the historic Bittweg, a procession route between Aachen-Preuswald and Moresnet. The path of the procession leads, via a number of crossroads, to the pilgrimage church in Moresnet-Chapelle, where (so the story goes) a peasant boy was cured of epilepsy by praying to a statue of the Virgin Mary. The procession takes place on this path every Wednesday, and the path is also part of the famous pan-European Pilgrim’s Way that leads to Santiago de Compostela in Spain. On either side of Bittweg, beneath the brush and overgrowth, you may spy former boundary stones marked XVII and XVIII. These boundary stones are the last “representatives” of the former microstate Neutral-Moresnet, which for more than a hundred years was the fourth state in this border region.

Passing through the Königswald, the hike crosses the Three-Country Point. At this spot, the borders of the Netherlands, Belgium and Germany converge at a single point. This place has become something of a tourist attraction in itself, drawing some 800,000 visitors annually. In addition to being the highest point in the Netherlands (at 322.5 metres above sea level), the Three-Country Point is also a monument to the shared history and connections carried down through history between the inhabitants of the three-country region.

Continuing through Königswald and Preuswald, and then through the villages of SchampeIheide and Flönnes, the trail takes you back to the starting point of the hike. Although the hike does not actually go through the town centre of Kelmis, a slight detour to see it is worth your while. The first written mention of the village dates from 1280, then referred to as “Kelms”. That name comes from the Latin word “calamine”, meaning zinc ore, which is abundant here. So abundant, in fact, that in the 19th century this village was the powerhouse of Belgian zinc production. Today, with its population of approximately 10,000, Kelmis is the second-biggest municipality of the German-speaking community in Belgium (after Eupen). Follow the signs for the short detour to the Göhltal Museum, in the town centre, where you can learn more about the local history.

Cafés catering to hikers are found in Hergenrath, Kelmis, Moresnet, Aachen and the Three-Country Point.

Please stay on the designated paths.

Information about this and other border hikes: http://www.grenzrouten.eu

The hike includes light and moderate inclines, both up and down. The loop is marked in both directions (follow the "Grenzrouten" [border route] signs). Along with paved sections, the route also includes unpaved and uneven paths and trails. While the trails on the northern section of the hike go largely through wooded areas, in the southern section hikers will be much more often crossing open fields and skirting the built-up areas of the towns and villages.

The nearest bus stop to the hike’s starting point is "Hergenrath Friedhof". From within Germany, you can reach the bus stop as follows:

From the Aachen main bus station or Aachen main train station, take line 14 (towards Eupen Bushof) to “Kettenis Dorf”, and from there take line 396 (towards Kelmis B.B.L.) to the stop “Hergenrath Friedhof”.

The same lines will take you back to Aachen afterwards.

For your full journey by public transport and fare information, see: www.avv.de

To plan your individual trip by car, use our journey planner and enter “Altenbergerstraße Hergenrath, Belgien” as your destination.

Limited parking available at the starting point of the hike.

One indispensable resource for hiking and discovering the border country is the GrenzRouten pamphlet (2009 edition), which tells more of the story of the many historical relics and the living history of these shared borders. This pamphlet comes with a removable hiking map of the area, with seven suggested hikes. It is available in German and Dutch for a nominal fee of €2 in local tourist offices and some bookshops.

For this hike, we recommend waterproof hiking shoes and weather-appropriate clothing. Be sure to bring enough water and take a little food with you, and you’ll be all set! 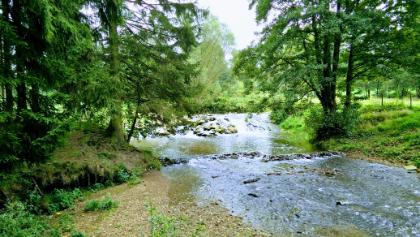 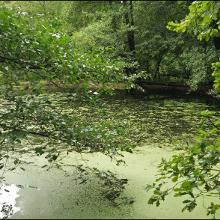