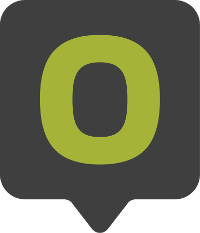 Responsible for this content
Outdooractive Editors Verified partner
Lena Wiesler
on the July 23, 2018

Panoramic mountain tour from the Hintersteiner Giebelhaus to the Fuchskarspitze

We climb the three peaks of Fuchskarspitze in the Allgäu Alps. Our path leads from Giebelhaus through Bärgündeletal to Prinz-Luitpold-Haus and then further to the northern summit, the Madonna (middle summit) and the southern summit of Fuchskarspitze. The marked path ends after the Prinz-Luitpold-Haus. Partially exposed and fragile rocky areas of difficulty III (UIAA) must be overcome. Therefore this tour is also reserved for experienced mountaineers. During the tour we enjoy a wonderful panorama over the surrounding peaks like the Schneck, the Hochvogel or the Höfats. The tour is rarely overcrowded due to its degree of difficulty, usually you have the peaks to yourself.

If you want to take a little more time for the tour, you can stay overnight at the Prinz-Luitpold-Haus.

Some climbs on the ridge are a bit tricky. If you are not quite sure, use the equipped rappel hooks.

We start our mountain tour at the Giebelhaus, where we can have a little refreshment right at the beginning. We cross the Ostrach and walk on the left side of the Bärgündelsbach (Sausteig). The road is still asphalted and relatively flat, but this changes after almost 2 km. After passing the beautiful Täschle Falls, we cross the Bärgündlesbach. At the same time we see the path to our right, on which we will return to the Giebelhaus at the end of the tour.

At the next fork in the road we keep left and climb up to Bärgündele-Alpe which is open from May to September. We follow the path which now winds uphill in serpentines below the material cableway, until we reach the Prinz-Luitpold-Haus after a total of 5.5 km. Here we can enjoy a refreshment, before we follow the path that rises in a southerly direction.

First we cross a relatively flat gravel field, then we climb uphill in serpentines. At a fork we keep left and reach a small high plateau just 2 km behind the Prinz-Luitpold-Haus, west of the Balkenscharte, on which a striking rock needle (beam) with summit cross stands.

We now make our way up to the southern tip. We choose the channel to the left of the middle of the wall (degree of difficulty I to II). Suspended climbing then leads us left of the edge upwards over several heels and steps (III) and a chimney up to grassy ground, where the normal path comes up from the right. On this it goes to the tower before the summit, which can be climbed over a crack and several steps (III). Then we are on the southern summit.

Through easier walking terrain we reach a crack about 4 m high, through which we have to climb down. Then it goes further over the ridge with partly quite brittle rock. Here we can already see the beautiful top of the Madonna, which we next climb through a chimney (III). The descent from the middle summit takes place through two chimneys into a gap, then it goes through a fragile but otherwise unheavy channel (I), in which a safety rope is attached and up to the northern summit. Via easy climbing and gravel it goes down towards Prinz-Luitpold-Haus. At a crossroads we come to the Jubiläumsweg, which we follow to the left.

The descent from the Prinz-Luitpold-Haus is the same way as the ascent. At the crossroads we already know, turn left and we finally reach the Giebelhaus.

By train to Sonthofen station, then by bus to Bad Hindelang and Hinterstein and by the Giebelhau bus to the Giebelhaus

On the B19 to Sonthofen, then on the B308 to Bad Hindelang, on the Ostrachstraße to Hinterstein and with the shuttle bus to Giebelhaus 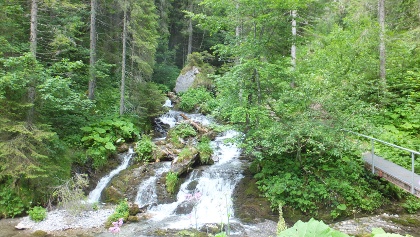 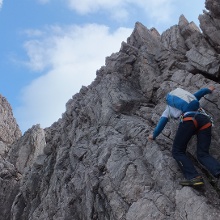 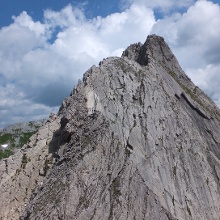 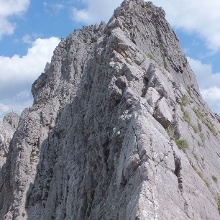