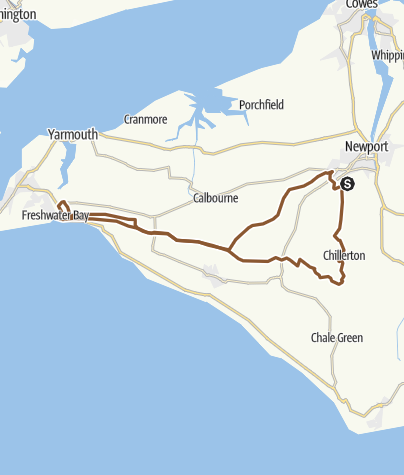 Starting at Carisbrooke, on the outskirts of Newport.
The route initially goes through Gatcombe, then Chillerton.

It joins the Tennyson Trail at Shorwell which we follow to Freshwater.

We then return mainly over the Tennyson Trail back to our destination.

The starting point is the 'Priory Car Park' a popular parking place for local riders, and it's free.

Leave the car park in a westerly direction for 200 metres to the junction of Froglands Lane. Then turn left to take the N108 towards Gatcombe

Keep climbing up this deep wooded gully until you see daylight. Go straight on, through the field with the two gates. When you leave the field, join the G6 Chillerton going steeply downhill on a concrete road.

At the road junction bear right. After 30 metres join Newbarn Lane. After 400 metres the road turns sharply right, turn left on to the unmarked bridleway. After climbing the hill, continue for 80 metres, and take the track on the right marked by a metal pole. Keep on this track for 1 Kilometre when it will turn sharply left downhill to join the tarmac road, (Main Road, Chillerton).

Turn left, and after 140 metres, turn right into Hollow Lane G15a. Take this steep track for 400 metres. When you reach the top of the track at the field, turn left, and follow the field edge to the confluence of paths where you carry on down on the G15a Ramsdown.

At the road turn right, and then right again at the junction. After 200 metres, when you turn left onto the G13, and climb towards the large aerial

Immediately the climbing stops, take the gate in right hand corner of the field, towards the aerial.

At the concrete road, turn left, and after 900 metres take the non-signposted chalk track on your left. Take this track going through the two gates to follow the track in the field alongside the wood. Take a sharp left in the corner of the field and descend to join the road.

Continue straight over the road onto the SW51.

take this track to join the Tennyson Trail at Brighstone Forest

The track merges seamlessly into the Tennyson Trail, when it will drop downhill, on a fast chalk track, alongside the forest, on our right, to the main road.

Cross the road, (Strawberry Lane) into the car park.

Go straight up the hill past the bronze age barrows, and then downhill again, to cross another road, (Brook Road B3339).

Climb steeply uphill on the chalk track until it levels off.

You will eventually reach Freshwater Golf course, where you have a long downhill into Freshwater Bay. Although you will be descending at speed, remember to keep left at the bottom of the descent, to join the road at the top of Freshwater Bay

There's a cafe open in the summer months, and there are some toilets nearby.

Turn right onto Afton road, which runs alongside the Car Park.

After 700 metres turn right towards Newport. Keep going on this road for 400 metres, take the second right into Manor Road. After 60 metres, there's a gate on your left. Take this path towards the ridge of the downs.

The route is a very straight forward reversal of what you've already done, but you are sticking wholly to the Tennyson Trail.

Take extra care when you enter the forest, after climbing from the car park. There are many paths merging here. Make sure you are going uphill, on the steepest track, in a easterly direction.

When you finally leave the forest, the trail now becomes open fields till you reach Carisbrooke.

There are a few gates to negotiate, but with the prevailing south westerly wind, this is a fast section.

When you finally drop down to meet the tarmac road at Nodgham Lane. Turn right to meet Clatterford Road. At Clatterford Road, take a right, then almost immediately left, down Clatterford Shute. Cross the ford and follow the road - bearing right at the fork; to cross another ford.

Keep climbing on the road to the junction, where you turn left to the car park where you started. 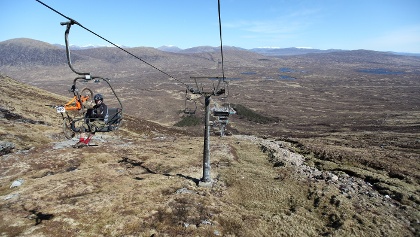