Between Valbruna and Tarvisio on this circular tour you will catch sight of the 1,790 metre high Monte Lussari, which has wonderful views and is the location of a picturesque place of pilgrimage. Back in the valley, from Camporosso the trail goes via the “Parko Cervi” game park and into the centre of Tarvisio with its Roman roots.
moderate
Distance 13.7 km
Duration5:10 h
Ascent1,065 m
Descent1,110 m

The Julian Alps extend over both Italian and Slovenian national territory. The mighty rock faces of the Julian Alps alternate with elevations characterised by strips of rock overgrown with grass and steep slopes with compact or fragmented rock. Four elevations, which together with their subsidiary summits form four groups of mountains, determine the appearance of the Western Julian Alps: the Mangart (2,668 metres), the Wischberg (2,666 metres), the Montasch (2,753 metres) and the Kanin (2,587 metres).

The Saiseratal Valley, which is set against a striking mountain backdrop, including the famous Wischberg and Montasch peaks, is probably one of the most fascinating valleys in the Julian Alps. Many forest roads and trails branch off the asphalt road which leads from Valbruna to the excursion destination Oitzinger-Wiesen, with an open invitation to many beautiful hikes.

One of the best sites for enjoying an unequalled view of the whole mountain chain of the Julian Alps is the Lussari Mountain. The hike leads uphill through the Tarvisio woods along the charming pilgrims’ path to the pilgrimage church of Maria Lussari, which together with the small village of the same name has been the destination for pilgrimages by Italian, Slavic and German believers since time immemorial. According to ancient lore, the church was built on the point where the mother of God is said to have appeared. Impassioned skiers rate the Monte Lussari highly because of the Prampero piste. The pilgrims’ path (“Sentiero del Pellegrino”) is very popular with trekking fans.

Camporosso (in German Saifnitz) with the Fella and the Canal del Ferro/Eisental Valley on the one side and the Val Canale/Kanaltal Valley on the other side lies precisely on the watershed between the Adriatic and the Black Sea.

Tarvisio is one of the most important ski regions and mountain sport centres in the Friuli-Venezia Giulia region. This small town, surrounded by the Julian Alps, numerous valleys and extensive woodland, has a modern feel but also an “old soul”, and it also has many traditions which are well worth discovering. Due to its location in the “Dreiländereck” where Italy, Slovenia and Austria meet, Tarvisio is a crossing point for languages and cultures. The excellent regional cuisine bears the stamp of Friulian, Carinthian and Slovenian influences.

From Valbruna, at 810, we reach the roadway of Val Saisera valley and go along it for around 2 km (it’s also possible to follow the route of the cross-country track on the right side, parallel to the asphalt road).

At a junction we turn left (signs for Monte Lussari), following the dirt road that crosses the Saisera river and then rises into the wood on the slopes of the Cima del Cacciatore.

After ascending for around 5 km and passing a ridge, the road descends for a short distance and then continues to climb up to the Sanctuary of Monte Santo di Lussari, at 1760 m. After a visit to the Sanctuary and a unmissable pause in one of the typical restaurants and mountain rifugi of the picturesque village, we take the road again for a short distance upwards, then take an immediate left turn and go along a wide path that descends, near a chairlift, to the pastures of Malga di Lussari, at 1573 m. Here we turn a sharp left and begin our descent in the woods along the mule track, CAI trail 613 (Sentiero del Pellegrino).

The mule track, which further down turns into a forest road, runs in its entirety through the wooded valley of Rio Lussari up to the houses of Lussari, at 861 m. Soon we reach the Lussari cableway departure station and the Alpe Adria cycle Park which we follow in the direction of Tarvisio, leaving behind us the houses of Rutte di Camporosso to the left, at 780 m. To reach the centre of Tarvisio we can continue on the cycle path or take the marked trail, which runs parallel higher up to the left. 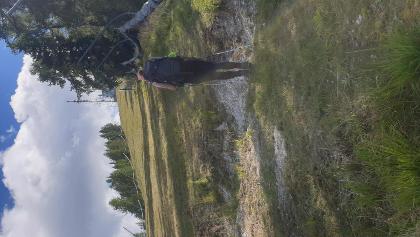 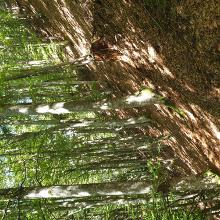 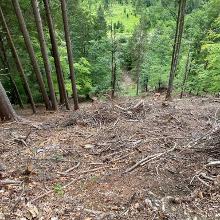 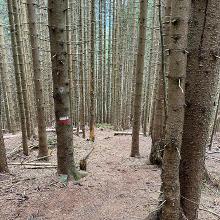