Where history meets legend
open
moderate
Distance 2.6 km
Duration1:00 h
Ascent135 m
Descent135 m
A hike with a "waterfall" destination is always a beautiful hike, even more so if it is in Quiliano’s backcountry valley and not high up in the mountains: the Donnaiola waterfall, hidden by thick vegetation, is not that well known but it is truly spectacular with its 15-meter-high jump and a beautiful lake with crystal clear water.

The trail starts from a small village in Molini area, whose name comes some of the buildings in this town that are used for grinding wheat and that were once powered by the driving force of water. The trail then goes through a hazel, ash, and holly forest, crossing the Danè stream several times; every now and then on the trail's rocky bottom you can see furrows due to wagons constant passage.

In the distance, among the trees, there are Cerri village's houses while, near the trail, you find the ruins of the ancient "Dolarium", a "strong house" of what could have been a medieval village. A little further, the characteristic and well-preserved humpbacked "Ponte della Ratta", with its original surface area, which allowed to reach Montagna hamlet.

At the second crossroads, turn right following the signs to the waterfall, whereas if you were to turn left, in about 40 minutes you would get to Faia village. Cross the second bridge, "Ponte della Faja" to then go down to the left towards the riverbed. Follow the stream and you will get to a lovely field. From a crack in the rocks, you will also be able to see the waterfall that forms the lake below.

Keep in mind that in spring or anyway after heavy rains, crossing the stream could become problematic.

Fairly easy trail but careful when wading the river.

Refreshment available at Molini Tavern at the beginning of the trail.

Molini Tavern is on the road that from Quiliano takes you to Roviasca and Montagna hamlets. 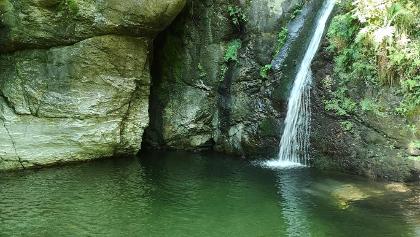 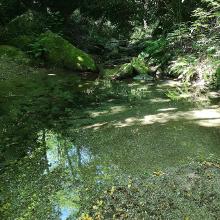