The Donausteig - simply fabulous! Summit assault onto the Gobelwarte - one of the seven Donausteig-peaks. We are moving from the plains of fertile Machland over the promising Gobelwarte into the narrow Donaukerbtal (valley) of the Strudengaus. We discover the "Machlanddamm (dam)" the project of the century, a collegiate church without an abbey, a castle in which history lives, the inspiring Klamschlucht (gorge)...
difficult
Distance 22.2 km
Duration7:00 h
Ascent441 m
Descent440 m
This Donausteig-stage starts in Mitterkirchen. The rural market is located near the Danube River in the heart of the Danube Plains of the Machland. The mighty flood defences of the Machlanddamm illustrates that life with the river Danube means always living with the risk of floods - an impressive start to the stage. From here we trek on rural back roads through the vast fields of the fertile plains of the Machland. The Celtic village of Mitterkirchen gives us an insight into the world of the Celts - unique on the Donausteig! Further towards the edge of the Machland plain we reach the edge in Baumgartenberg. Here, the "Stiftskirche ohne Stift" (church without an abbey) reveals its secrets to us and also tells about the settling of the mühlviertel (region).

In Baumgartenberg begins an attractive trek through the Mühlviertler hills to the Burg Clam (castle). Initially the looks reach far beyond the Machland, later small fields and quaint forests dominate the hilly landscape. On rural and old forest roads, we reach the Burg Clam (castel)- a real gem! Fully furnished and since 1454 inhabited by the family Clam, it allows an unusually personal approach to history. From here, we walk on to the idyllic market Klam passing down through the wild and romantic Klamschlucht (gorge). Mystic rock formations and the splashing of water provide us with inspiration - as once famous poets and painters were inspired. In Obersaxen, we reach the edge of the Machland plains again.

The farmers market is one of the oldest parishes in Upper Austria and amazes with its mighty Church in the village centre. Here begins our summit assault. On old footpaths and tranquil forest paths we gain altitude quickly. The climb through the rural landscape inspires with its beautiful far-reaching sites and beautiful landscape impressions. Arrived on the Gobelwarte (mountain) we are on one of the seven Danube climbing peaks. We did it - congratulations! Here on the one hand are the wide plains of the Machland and on the other the narrow Kerbtal (valley) with the historic city of Grein at its foot. We are therefore on the separation between the Machland and the Strudengau. On the descent after a few minutes we reach the Donausteig-resting point "Gobelwarte" with its unique view – the distance between the Machland and the alps seem almost limitless! Now we finally bid farewell to the Machland. A forest descent brings us down on forest paths and hiking trails to the historic town Grein, the gateway to the Strudengau. Conclusion: A Summit assault of the especially kind - simply fabulous!

Discover the following features with the Donausteig-diary

-The Project of the century "Machlanddamm (dam)"

-Celtic village of Mitterkirchen-the cattle barons of the Hallstatt times

Baumgartenberg-Abbey Church without an abbey?

1. a tour in museum "Keltendorf Mitterkirch" provides in detail sites into the world of the celts! 2. A castle tour at Burg Clam (castle) provides not only a new experience of teh Donausteig, but also shows a personal trait of the still living there family Clam!

Mitterkirchen - The Donausteig-Starting point "Mitterkirchen" lies on the north end of the sport park (on the eastern city edge, approx. 300 m from the city center) (231 m)

Grein – the Donausteig-starting point"Grein" is at the Donaulände (park) in a green area between the main road and the parking lots in the direction of the city (Opposite to the Cafe Schinagl with the ferry dock of the opposite tourism Oberösterreich Touristik- the only House directly on the Donaulände!)

From the Donausteig-starting point on the outskirts in Mitterkirchen, we follow the paved road past the flood dam East up to the Naarnbrücke (bridge). Before the bridge, we turn left upstream. On the Naarnbrücke (bridge) in Labing, we cross the Naarn and follow the paved road to the East. After approx. 100 metres we turn left. We leave the route during the preliminary stage of the Donausteig at the intersection and turn right towards Lehen. The Museum "Celtic village of Mitterkirchen" is located at the end of the road on the right hand side. At the T-intersection, we follow the left road over Kühofen up to the former Abbey Baumgartenberg. Here between the school sports field turn left and cross the railway tracks subsequently. On the main road continue left. After 150 m turn right down a footpath leading uphill - first along the route, then turn left across the meadow. The descent into the forest starts on the right, but then leads on a sharp hook again left at the edge of the forest. From there, the way to the right takes us to the Landgasthof Rechberger (inn). Here cross to the right the main road at the car dealership. Following the asphalted road Steindl we passed a high ridge the Donausteig-resting point "Weißes Kreuz". At the cross by the intersection, we then turn right and continue through a small basin to reach a 180 ° right curve (shortly after the second river). In the radius of the turn, we turn left from the tarmac road and follow the trail up to the Donausteig-resting point "Mühlberg" in Sperken. Further, the path goes downhill onto the asphalt road towards Klam. After about 250 metres we turn right onto a path (bike path to the Burg Clam) and reach the Castle Klam after a few minutes. From the Castle car park we follow the asphalt road again downhill in the direction of Klam, passed the Donausteig-starting point "Klam" to the bridge of the Klambaches (river) at the southern end of Klam. Prior to the bridge, turn right. Now we walk through the Klamschlucht (Gorge) down to Au (A part of Saxen). Left, the settlement road brings us up to the T‑Kreuzung at the cultural center of Sturmmühle. There on the local road turn left towards Obersaxen. After a good 800 m we turn at the large crossing to the right follow the road almost straight up to the music school. On the north side of the school, a walk leads directly into the Centre of Saxen. We circle the the parish church to the south and turn left at the junction to the Inn Auer. There a path to the right leads between houses uphill. We quickly leave the area. At the next farm hamlet (2 houses) we remember uphill towards the North. Shortly before the eye-catching Hubertus Chapel, the trail leads straight through the Woods. Then, we follow the road straight uphill - to a second farm. Turn left downhill. Passed a meadow and a forest, we reach a forest path above a large farm. We follow it right through the woods slightly uphill, until we reach the Votivkapelle (chapel) on the asphalt road. Here turn right and after 50 m turn left - on this road we reach the Gobelwarte, the highest point of the stage. From there we follow the asphalt road - downhill - until its end at the farmstead of Plank. Turn Right, and a walk through the woods brings us rapidly downhill. At a House, we reach a forest road which we follow to the left. After about 500 m, we leave it again and hike along a trail winding up to the outskirts of Grein. Over the railway tracks, we reach the main road, which we follow up to the Donausteig-starting point "Grein" at the Donaulände (park).

To facilitate the orientation, the Donausteig was provided with its own system of orientation - you will find the description  here  .

Mitterkirchen can be reach by bus. A transfer back from Grein to Mitterkirchen is possible as well by bus. Bus timetables online at http://www.ooevv.at  .

From the parish church in Mitterkirchen follow the main road to the east. After approx. 230 m at the junction next to the Kraglhof (in a left curve) turn right onto the sport area. At the next junction the Donausteig-starting point lies on the left hand side  (Navigation: A-4343 Mitterkirchen im Machland, Sportzentrum).

Directly next to the Donausteig-starting point "Mitterkirchen" there are the parking possibilites of the sport center. Two further large parking lots, free of charge as well, are at the city center (one 100 m north of the church and the other 100 m south of the church at the primary school).

On top of basic hiking gear, one should only take notice of the fact that there are no restaurants/inns between Saxen and Grein.
Travel Guide: Long-distance hikes in Donau-Oberösterreich
Austria › Upper Austria › Perg › Baumgartenberg 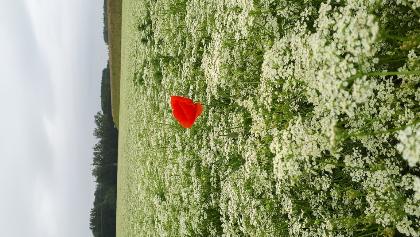 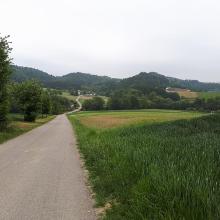 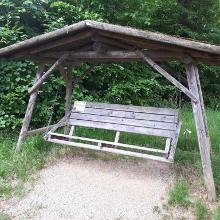 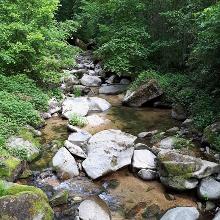