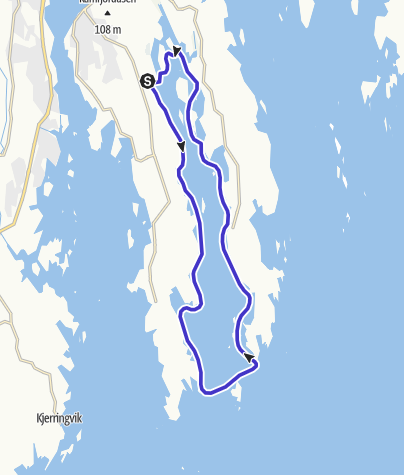 A slightly longer route and perfect for the more experienced paddler. Paddle past many cabins and islets and enjoy a variety of different beaches and islands along the route.

At Ormestadvika you can find:

Continue following the eastern coastline and cross a bay. After half a kilometer, you will reach a peninsula with some small islands on the south side. The first is Namløsholmen. Here it is possible take a break and stretch your legs. Further along, you will pass Kjølhalskjæret and Berganholmen. Another 400 meters south lies Eianholmen and Andholmen, which has a beach on the north side and another great place to take a break.

Privately owned cabins are quite close to the coastline, but kayakers are usually welcomed. Respect the homeowners privacy if you are interested in taking a break on the shore.

Further along the route, you will paddle along a coast which is difficult to land on. But 1.5 kilometers further, at Helle, you will find a nice, southwest-facing beach. In the Yxney area, you will reach a long beach and some small rock islands and islets. On the south side of Østerøya lies Tønsberg Tønne, an old seashore beacon mentioned in the “Sverre’s Sagas”, the stories about the King of Norway in the 1200’s.

From the southern tip of Østerøya, paddle west over to Vesterøya and into the beautiful bay, Fruvika. From here, the route back to your starting point takes you north along the western side of the fjord. Along the route, you will paddle past many rocky islets and cabins. There are small beaches in a bay on both the south and north sides of Alvetangen which can provide a great place for a break.

From Alvetange, it is only half a kilometer to Grubesand beach and then another 2.5 kilometers back to Ormestadvika.

From Oslo, follow E18 east towards Kristiansand for nearly 117 kilometers until you reach exit 42 toward Fv 305 Sandefjord. Follow Fv305 to Fv303 through Sandefjord and follow signs to Vesterøya. Once at Vesterøya, stay on “Vesterøyveien” for 2.4 kilometers until you take a left towards Ormestadvika. You will find parking right at the small marina.