Willy uploaded an image.
All contributions

9.1 km
2:15 h
369 m
637 m
With the opening of the Landwasser tunnel as a winter-proof link with Wiesen and the Albula valley at the end of 1974, the old canton road, built in 1872, through the wild gorge could be cleared for car-free hiking access. It can be reached from Monstein RhB station in 5 minutes. You must press the stop button on the train to request a stop at Monstein station. From the train station, you walk along the street heading out of the valley to Schmelzboden and the mining museum, the former administrative building of the mining company on what was called “silver mountain”. In “Schmelzboden” inn, which is in the same building, you can pick up a leaflet about the nature trail.

The trail to the Zügenschlucht begins at this inn, as does the stone nature trail, along which boulders and boards display names and origins to give you an overview of the stones that are found in the Davos landscape. Until Brombänz, the trail leads left first, and then right along the wild Landwasser river. The path and river often compete for space in the narrow gorge. Until the summer, residual snow can be seen in the avalanche tracks in the gorge, hence its name (Zügen = tracks). At the strait of Brombänz, the railway, appearing only briefly from the tunnels, crosses the gorge and our hiking trail. The creek with the waterfalls, opposite the lay-by with its fire site, form the boundery of the Davos region. Rock galleries, steep, forest-covered drops, the wild water in the deep gorge and, particularly in early summer, a rich and rare flora await you.

The Landwasser carves itself deep into the rocks at Bärentritt at the end of the nature trail. At Känzeli, the view opens up into the Albula valley. We turn left from the disused road, cross the tempestuous creek on a narrow bridge that worms its way under the train platform, and reach Wiesen train station via a good forest path. This is where the nature trail begins, which informs us of all kinds of interesting facts about plants and animals.

Those with a head for heights can take the Wiesner viaduct across the rocky Landwasser gorge. At the end of this structure, the old entry signal from the train station is still standing, a Hipp's turning-disc signal. A shaded stroll along a gentle incline then takes us through the forest along the nature trail. After crossing Breitrüfi, we enter Caviawald forest, which greets us with a carpet of lily of the valley. When we exit this forest, we can see the village of Wiesen on a terrace on the other side of the valley. We continue along a road through Schönboden lay-by, named Ziegelboden on maps, to Visura; the Piz d'Ela can be made out on the left, on the right is the church of Schmitten.

Now we walk on a hard road surface, leaving the nature trail at the next right turn, continuing straight briefly and then following the road which forms a long curve to the left. At the transformer station, we turn right and descend steeply, following the path to the right again, and pass under a small railway bridge before reaching Filisur train station.

Wiesner Viaduct: After Davos had been the last station on the Rhaetian Railway for 20 years, the stretch of track to Filisur was inaugurated on 1 July 1909. Of the many artistic constructions, the Wiesner viaduct is the most striking work, but despite its size does not appear alien in the landscape. The 210 metre-long viaduct, including a main arch 55 metres wide, was built between 1906–1908 and designed by renowned bridge-builder Hans Studer. Firs with a total length of 8.1 kilometres were felled to provide the wood centring needed for the construction .

Getting there: By train (RhB) to Monstein Station.

Getting back: By train (RhB) from Filisur.
Arrival by train, car, foot or bike 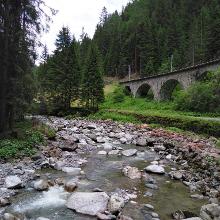 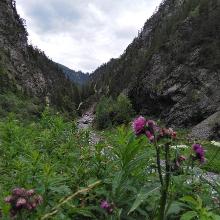