A pleasant round tour on the Eastern slopes of Börzsöny and on the side of Naszály, passing by several villages and resting stops. The cherry on top of it is the unique panorama of the Danube Bend.

A fairly level hike, taking us to the popular and less known parts of South Börzsöny. Our route meanders across charming woods on nearly 20 kilometres, sometimes on wide dirt roads, other times on small, romantic paths. We cross Magyarkút, Szendehely, Katalinpuszta and Verőce, passing by a hiking centre and a notable memorial.

The most memorable moment of our tour awaits us at a less known, but definitely spectacular lookout spot of the Danube Bend. From here, on Fenyves Hill, we get a perfect panorama of the Visegrád Hills, the Szentendre Island, and of course the winding Danube among other interesting sights.

The tour does not require any particular precaution, but be careful, and always check the weather forecast.

Our fairly easy, 20-km route with only a 334 overall ascent starts on a wide dirt road from Csattogó Valley at the foot of Börzsöny. We follow the characteristic yellow markings of Via Margaritarum (a pilgrim road) symbolising a rosary in the direction of Magyarkút until we reach the red (P) trail leading out of Verőce. We follow this turning left, walking north in a weekend house district, then after two kilometres, we turn left on the blue square (K ◼) trail. We cross Gimpli Creek on a stone bridge, and we shortly—still walking among houses—reach Irma Spring, also called Magyar-kút, that is famous of its refreshing water. The setting of the spring was built in 1889, and its water is still drinkable. It speaks for its quality that many people who have weekend houses here use it as their source of drinking water, and not only during the summer heat waves. But the spring is not the only place where we can find refreshment. The restaurant standing directly next to it, called “Kocsma a pipáshoz” meaning “Pub to the pipe Smoker”, has every worldly good to offer whether we are hungry or thirsty.

From Irma Spring, we follow the blue (K) blazing of the National Blue Trail from here in a northern direction. We are more or less walking straight in the shaded valley, where a forestry road takes us to the similarly refreshing Aranyos-kút. From the charming forest resting stop, we have to walk more than 3 km to reach Szendehely, which we will also cross walking on its tidy streets. We approach the village from the west, trekking along a scenic hayfield, passing by a small chapel standing at its edge.

The area was originally called Szenthely (“Holy place”)—probably due to the landlord being the bishopric—, but it changed to Szendehely over time. In 1717, German settlers arrived in Hungary from the Franken region of Bavaria, and established a village at the nearby Berkenye. As it became overpopulated, part of the villagers moved here in 1753 and settled next to the road leading to Vác and the Nagymaros ferry. Forestry and viticulture used to be dominant occupations in the area. There are still expansive vineyards on the surrounding slopes, keeping up the tradition of winegrowing.

The village used to belong to the estate of the bishop of Vác, which was probably bestowed upon the Church by Saint Stephen, the first king of Hungary. At the time of the 1848 revolution, almost half of the houses of the village burnt down in a fire. Fortunately, many old buildings are still standing despite this, and many homes are still furnished with traditional furniture, characteristically painted red. These are made of pine, and painted with a special wood grain painting technique. On the parapet of the arched bridge of the old village stands a stone statue of Saint John of Nepomuk made in 1830—our route also passes by this monument, following the blue (K) trail.

Just as we leave Szendehely through the woods, in a few hundred metres we find ourselves on Katalinpuszta (also a part of the municipality), also known as The Gate of Börzsöny. The hiking centre found here is a forest resting stop and an activity centre for families and groups of friends at the same time. This forest school and modern accommodation is the starting point of the rather scenic Gyadai study trail and the Hangyavasút (“Ant Railway”) that is extremely popular with children, but there is also a charming little pond and a snack bar here. It is also the starting or the end point of the “Börzsöny leg” of the National Blue Trail, where we can collect stamps for our booklets.

We leave Katalinpuszta on the red (P) trail, climbing up on the side of Naszály. The first steep section of the path is cut short by the next, sideways trail, and we will not have to worry about climbing the 652-metre-tall hill even after that. Our narrow, rollercoaster-like path passes by the Rockenbauer Pál Memorial, honouring the memory of an icon of Hungarian hiking.

Pál Rockenbauer and his legacy

Every Hungarian hiker knows Pál Rockenbauer and the country crossing series titled One and a Half Million Steps in Hungary directed by him. Hearing the cultic theme song of the movie (“Start walking one way, I’ll go another way...”) even people who are otherwise not interested in hiking or documentaries think of the group of travellers and their step-counter wheels in the movie. This series was undoubtedly the most successful production of Rockenbauer and his team, presenting the regions of Hungary and their locals in 14 episodes, earning the attention of tourist and non-tourist audiences alike.

But the list of the exceptional works of Rockenbauer does not end with this piece that is valuable from so many aspects. From the ‘60s, he shot numerous successful globetrotter movies of his travels, presenting the TV audience with rare insights into the frozen world of the South Pole, the beauties and challenges of mountain hiking and the colourful ecosystem of Cuban waters among others. The message and spirit his person conveys is still an ideal to follow for those who like to explore, see and experience things for themselves.

After the memorial, the red (P) trail passes by the once beautiful Czettler Villa, then descends to highway 2 on an overgrown path. Luckily, we only have to walk on the side of this busy road for a short while, but we will stay on an asphalt road even after that. After a junction, we continue on the red trail on a highway leading to Verőce, and we only enter the woods again after 500 metres. The path branching off to the left takes us up to the 294-metre-tall Fenyves Hill constantly ascending for almost two kilometres. A few metres off the red triangle (P▲) trail, we can enjoy the panorama of the always mesmerising Danube Bend.

From the lookout spot on Fenyves Hill, we get a perfect panorama of the Visegrád Hills in front of us, the Szentendre Island, the characteristic hills of South Börzsöny, and of course the Danube, among other interesting sights. After our eyes had their fill of the stunning scenery, we keep following the red (P) trail in the direction of Verőce. We descend to the village on a gravel road on the gently sloping ridge. This, approximately 2.5-km-long road meanders among small gardens and cottages, with a view of Naszály and The Danube Bend at several points.

The starting point of the route can be reached by train on the Budapest–Vác–Szob line. Alight the train at Kismaros or Verőce. Csattogó Valley can be reached from either municipality with a light walk of few hundred metres. 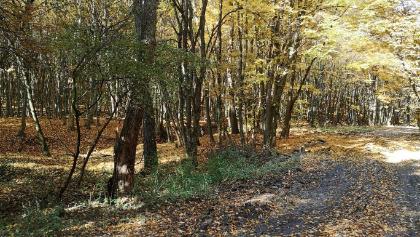 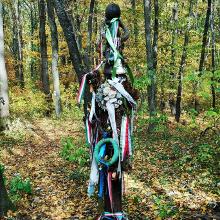