Responsible for this content
Nikos Polydorou
Adrian Wood
on the January 02, 2021 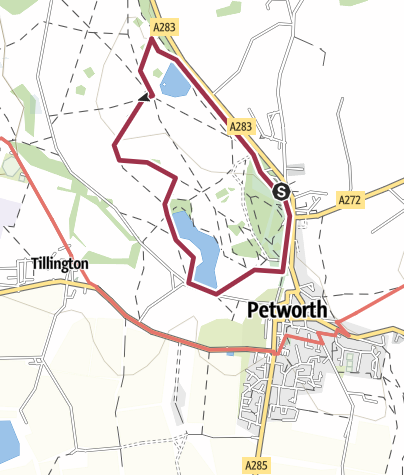 To start the trail turn right as you enter the Pleasure Ground and follow the path through the gate to the Park, past the kennels (on your right) and towards Lower Pond.

After an early morning sketch Turner would go fishing at Lower Pond. While the 3rd Earl of Egremont was used to this daily routine, it landed him in trouble at Tabley House in Cheshire. When commissioned by Sir John Leicester in 1809 for an oil painting of the lake there, he would often be found fishing mid-morning instead, and when pressed he responded that the sketch had already been completed! The finished painting was bought by the 3rd Earl on the death of Sir John, and can be found in the North Gallery in the House. You will still often find fishermen at Lower Pond where there are healthy pike, tench and carp populations.

A moment of inspiration

This modern view of Upper Pond, as seen from Petworth House, inspired Turner (1775-1851) time and time again. Petworth House is home to 20 Turner oil paintings, the largest collection outside of the Tate.

From the top end of Lower Pond any of the three paths towards Arbour Hill will lead you to Upper Pond. Follow the path to the right of Upper Pond, and stop shortly after the gate. You should have the two spring-fed Stew Ponds ahead of you and a lumpy grass hill on your right. Look across Upper Pond towards the House to see the scene from Turner’s oil painting entitled ‘Dewy Morning’, one of a set of four exhibited in the White Library in the House - this room is open occasionally to visitors, by kind permission of Lord and Lady Egremont. The paintings took over four years to complete due to Turner testing different subjects and compositions.

Petworth Park is home to a herd of fallow deer, geese and numerous birds of prey. Look out for them on your walk.

Walk across Mansion Lawn until you are roughly half way between Upper Pond and the House, and then turn around to look back across the lake - this was the inspiration for ‘Sunset, Fighting Bucks’, which is currently located in the Carved Room in the House. If you visit us in late September or October the deer are often seen rutting very close to the House.

Petworth House is home to many more Turner oil paintings - 13 in the North Gallery, four in the Carved Room and two in the Red Room. From Mansion Lawn take the gate to the left of the House through to the Pleasure Grounds. Take a right turn to visit the House or a left turn to return to the visitor centre and car park.