From the Grimsel Pass up to the Sidelhorn - Hiking Route - Wallis

From the Grimsel Pass up to the Sidelhorn

The upper stretches of Valais and the Rhône valley reach to the heart of the Alps. The historical passes that have linked northern and southern Europe for centuries bridge the continental divide here. Tunnels under the Alps now carry the bulk of the traffic, but the historical villages of the region bear witness to its former importance for trade.

The journey up to the starting point of this hike – the Grimsel Pass – is an adventure in itself. The road climbs from the village of Oberwald first to Gletsch – gateway to the Furka Pass – before tackling a spectacular sequence of hairpin bends up to the Grimsel Pass, at an altitude of 2,164 m. The pass was long the key trade route between central Switzerland and Lombardy: Swiss cheese and cattle travelled south, while mules carried wine, corn, rice and olive oil to the north.

From the pass, the trail leads up the ridge to the west. The views are sensational. To the north lie the lakes, hydroelectric reservoirs and glaciers of the Bernese Oberland: a raindrop falling on this side joins the Aare – the longest river entirely in Switzerland – ultimately to flow into the North Sea. To the left of the path, walkers look out over the iconic 4,000-metre peaks of Valais, and down into the lush valley of the young Rhône, at the very start of its journey past the vineyards of Valais – the largest in Switzerland – to Lake Geneva and ultimately the Mediterranean Sea.

This ridge hike between two worlds culminates at the highest point of the route, the Sidelhorn (2,764 m). Soon after, the trail leaves the ridge and drops down into the Rhône valley. At first the path leads downhill to the sparkling waters of the Jostsee, before turning north-east to return to the Grimsel Pass.

Look out for the steam trains of the Furka heritage railway. This section of the railway – between Oberwald and Gletsch – was the last to be restored, allowing the reopening of the full historical summit line in 2010.

The very first section of the trail from the Grimsel Pass summit actually leads through part of the Bernese Oberland – just to the right of the boundary with Valais. Higher up the slope, however, the path joins the geographical border, which follows the watershed – all the way to the Sidelhorn.

Beyond, the path drops down to a shallow col – the Triebtenseelicke – for a last view of the lakes and glaciers to the north. The trail descends to the Jostsee, reaching the lakeshore at its easternmost point, before turning sharp left to head back up the Rhône valley. The path now descends diagonally across the mountain flank to reach the westernmost point of the Totesee lake and rejoin the Grimsel Pass.

Train to Oberwald (Matterhorn Gotthard Bahn), change on to postal bus to the summit of the Grimsel Pass.

A9 motorway and main road up the Rhône valley as far as Oberwald, then follow signs for the Grimsel Pass («Grimselpass» / «Col du Grimsel»).

The tourist office in Münster has got brochures and information material about hiking in the region.

The Most Beautiful hikes in Wallis
Switzerland › Bern › Goms › Guttannen 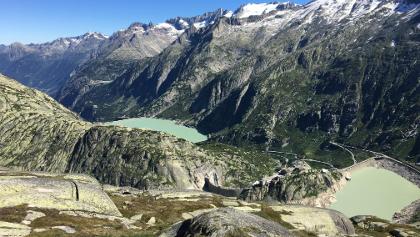 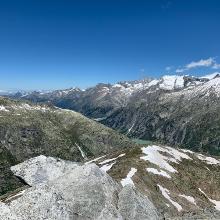 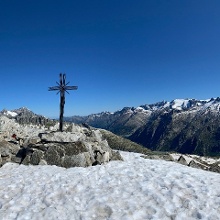 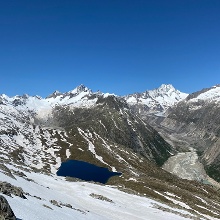