Responsible for this content
Scott Curtis
Juan Gavilan
on the December 13, 2020 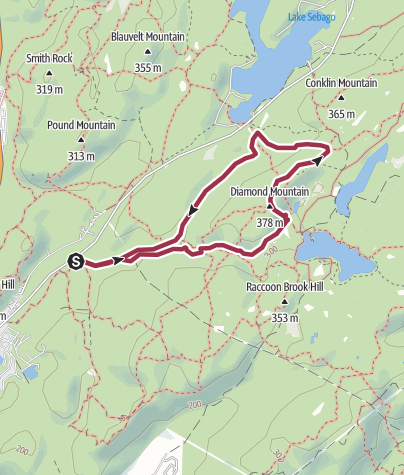 This loop hike at the southern end of Harriman State Park follows several picturesque streams and climbs to a viewpoint over Lake Sebago.

From the parking lot, head east (left when facing the woods), passing the Visitor Center to the left. You are following the red-on-white-blazed Pine Meadow Trail, which parallels Stony Brook, on the left. The trail follows a wide woods road, with a detour onto a footpath to the right to avoid a wet and rocky section of the road. After following this wide route for 0.4 mile, you’ll come to fork. The yellow-blazed Stony Brook Trail, which proceeds straight ahead, will be your return route, but you should bear right and continue along the red-on-white-blazed Pine Meadow Trail, which begins to climb.

Soon, the trail crosses Quartz Brook (a footbridge has been installed on the right, but it is easier to cross the brook on rocks when the water is low). Just beyond, the trail crosses a gas pipeline right-of-way, and it continues to follow a wide path along the hillside, high above Stony Brook (which can be heard below to the left).

About a mile from the start, an unmarked trail on the left descends on steps, but you should bear right to continue along the red-on-white blazed Pine Meadow Trail. A short distance beyond, you’ll reach a junction with the orange-blazed Hillburn-Torne-Sebago Trail, which leaves to the left. Turn left and follow this trail down to Pine Meadow Brook, which is crossed on a footbridge just above the scenic Cascade of Slid. On the other side of the bridge, turn right onto the white-blazed Kakiat Trail, which follows the north side of the brook. In another third of a mile, the blue-on-white Seven Hills Trail joins, and a complex junction is reached just beyond. The Kakiat and Seven Hills Trails turn right to cross the brook on another wooden footbridge, but you should continue straight ahead (do not cross the bridge), now once again following the red-on-white-blazed Pine Meadow Trail.

The trail ascends gradually through mountain laurel thickets, with the brook to the right. In another quarter mile, several huge boulders may be seen to the right. These boulders are known as Ga-Nus-Quah (Stone Giants). There are attractive cascades in the brook here, and open rock ledges just beyond are a good spot to take a break.

After proceeding through a fairly level area, the Pine Meadow Trail bears left and reaches a stone foundation, topped by concrete pillars – the remains of a building that served as the headquarters for several Civilian Conservation Corps camps in the 1930s. The “CCC boys” built several lakes in the area and the infrastructure for children’s camps around the lakes, but the camps themselves were never completed. A broken, rusty pipe atop the foundation is a remnant of a water system installed but never used.

A short distance beyond, you’ll reach a junction with the yellow-blazed Diamond Mountain-Tower Trail. Here, the Pine Meadow Trail bears right and descends, but you should continue straight ahead, now following the yellow blazes of the Diamond Mountain-Tower Trail. Soon, you’ll pass a large concrete structure below on the right. This structure was built in 1934 to serve as a septic tank, but it was never put into operation.

Soon, the yellow-blazed trail turns left and begins a rather steep climb of Diamond Mountain, with views of Pine Meadow Lake below. Near the top, the trail turns right and runs along open rock ledges, which afford views to the right over Pine Meadow Lake (to the right) and Lake Wanoksink (to the left). The yellow trail then bends to the left and descends slightly to end at a junction with the blue-on-white-blazed Seven Hills Trail.

About a quarter mile after leaving the road, you’ll reach a junction with the Tuxedo-Mt. Ivy Trail, blazed with a red dash on white. Turn sharply left and follow the Tuxedo-Mt. Ivy Trail downhill through thick mountain laurel thickets. The trail crosses Diamond Creek, climbs a minor rise, then descends to reach a junction with the orange-blazed Hillburn-Torne-Sebago Trail just before Stony Brook.

In about a mile and a half, the Stony Brook Trail is joined by the white-blazed Kakiat Trail, which comes in from the left, and both trails bear left to cross a footbridge over Pine Meadow Brook. A short distance beyond, the Kakiat Trail leaves to the right, but you should continue ahead on the yellow-blazed Stony Brook Trail.

After crossing a gas pipeline right-of-way, the trail crosses Quartz Brook (a footbridge has been provided on the left, but it’s easier to cross the brook on rocks when the water is low). A short distance beyond, the Stony Brook Trail ends at a junction with the red-on-white-blazed Pine Meadow Trail. Continue ahead, retracing your steps on the Pine Meadow Trail back to the parking lot where the hike began. 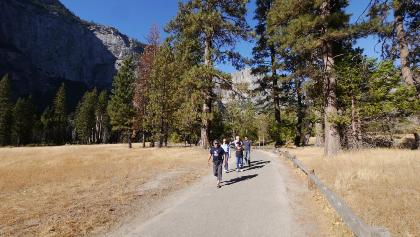