Responsible for this content
Vicky Inglis
David Rogers
on the September 06, 2020 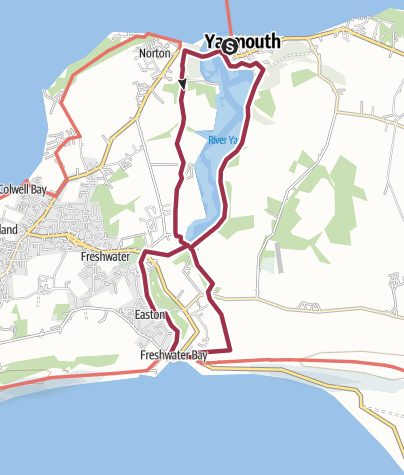 Circular walk around the Western Yar Estuary to Freshwater Bay, starting and finishing by the ferry terminal in Yarmouth, Isle of Wight.
easy
Distance 11.1 km
Duration2:46 h
Ascent47 m
Descent48 m
Highest point44 m
Lowest point-2 m
Within the Isle of Wight AONB, this walking route follows a gentle route around the estuary of the Western Yar through to Freshwater Bay, with spectacular views at all times.

From Yarmouth harbour, cross the bridge towards Norton, turn down the road first left towards the boatyard.  Follow the waymarked Freshwater Way into the woods and across the farmland past Kings Manor Farm.

Continue to the road by the Red Lion pub, take a left and follow the causeway road to the river.  Take the footpath on the right into Freshwater, then walk a short distance on the road, crossing at the roundabout.

Ascend from the lifeboat station to the golf club to find the return footpath towards Afton Farm.  From the farm, the route follows the minor road along the causeway towards the river.

Turn right onto the Old Railway line and follow the track along the edge of the estuary back towards Yarmouth.

The Red Lion pub near the causeway in Freshwater is a fine stop for a drink and something to eat, or have lunch in Off The Rails cafe in the old railway station in Yarmouth at the end of the walk.

The walk can be shortened by crossing the causeway and returning to Yarmouth on the Old Railway line track.

The Western Yar estuary is an important site for wildlife, especially overwintering wading birds and wildfowl.  Look out for red squirrels in the woodlands too.

5.0
(1)
David Rogers
September 06, 2020 · Community
Very enjoyable walk and fairly easy to follow (didn't read description). Not muddy despite some rain the night before, although we would expect a different experience in parts in the winter. Thanks for setting.
More Show less
Comment