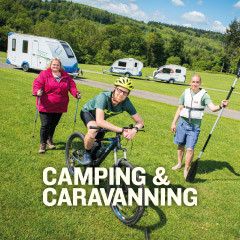 Responsible for this content
Camping and Caravanning
Tracey Webster
on the August 05, 2021

How do I view the directions for walk

A circular route of approximately 7.5km/4.7 miles that will take you along quiet country paths and lanes into the centre of Cromer, then along clifftops to return. There is plenty of interest along the way, from Neolithic burial sites to the splendour of Cromer Pier and beaches.
easy
Distance 7.8 km
Duration2:02 h
Ascent64 m
Descent64 m
Highest point64 m
Lowest point1 m

This route follows quiet paths and farm lanes. It passes a Neolithic Long Barrow on Stone Hill and Iron Age field systems on Roundabout Hill. More modern constructions will also be seen, notably Railway embankments and viaducts, some of which are still in use today. The route passes through the site of Old Cromer Zoo which was open for just 20 years, closing in 1981.

An iconic Norfolk landmark you will see both on approach to and especially behind you on leaving Cromer, is the town’s Victorian Pier. There has been a pier at this site since 1391, the current building dating from the 1800s after at least two earlier buildings were destroyed by sea and storms. The pier is famous for promenading, crabbing and traditional seaside entertainment.

The end of the pier houses the current RNLI Lifeboat Station, which welcomes visitors, depending on the operational demands of the day. There is also the Henry Blogg museum, named after a long-serving member of the crew who helped to save 873 lives from the North Sea.

Cromer itself developed in the Victorian Era as seaside holidays became popular, and has retained its Victorian holiday charm. Particularly impressive is the 160-foot tall tower of St Peter and Paul’s Church, built in the 14th Century, but containing modern stained-glass windows depicting the history of the local RNLI crews.

This section of coast boasts the longest chalk bed reef – at 20 miles long, the Cromer Shoals Chalk Bed was created during the Mesozoic Era and is deservedly referred to as the ‘British Great Barrier Reef’. The Runton cliffs themselves have produced much evidence of dinosaurs – most recently the complete skeleton of a Steppe Mammoth exposed by storms in 1990.

The return leg of the route passes the 17th Century Old Hall on Top Common. Although older artefacts have been found in this area no early settlements are believed to have been here.

Incleborough Hill, a National Trust site, gives glorious panoramic coastal and inland views. This hill literally stands out, due to its geology – unlike the underlying rock, Incleborough was created by glacial deposits at the end of the last Ice Age, giving it a distinctly different look and ecology to the surrounding area. As you walk around this beautiful spot you will notice many earthworks, which were created for training and defensive operations during World War II.

It is important to check the tide times for the section between Cromer and East Runton if you want to walk along the beach.

Question from Tracey Webster · August 05, 2021 · Community
How do I view the directions for walk
More Show less
Answer