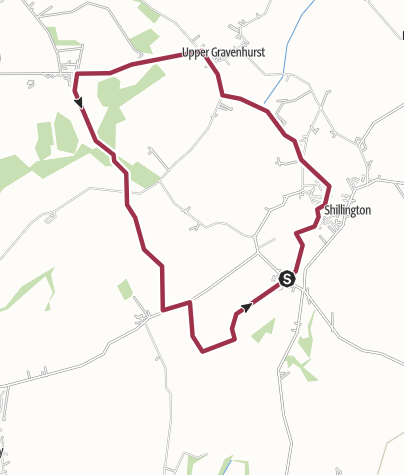 This walk explores the undulating countryside around the villages of Silsoe and Shillington, set between the Lower Greensand Ridge in the north and the chalk hills of the Chilterns in the south. take in the fantastic views along with a variety of fascinating Norman and mediaeval earthworks.
moderate
Distance 11 km
Duration2:42 h
Ascent47 m
Descent47 m
Highest point82 m
Lowest point49 m

1) Walk up church lane.  follow the road around to the right, pass some parking spaces and then right into New Walk (be careful, this hasn’t been signposted for a while). Turn left through the kissing gate.

2) Cross the playing field, then bear left to the corner of the next field and on to Bury Road. Follow the footpath on the opposite side of the road alongside the stream to Church Pannell.Church Pannell earthworks once surrounded a mediaeval building and may have acted as protection both from attack and from floods.

Continue to follow the path beside the stream, across two footbridges separated by a pasture. After the second footbridge, turn left and follow the edge of the field, crossing into the next field on the left, to Barton Road, just outside Lower Gravenhurst.St Mary's Church in Lower Gravenhurst, to the left of the route, was used as a refuge by villagers during the Civil War. Traces of bullet marks can still be seen on the door. The church now stands isolated, as the village has largely disappeared.

3) Turn right along Barton Road through Upper Gravenhurst, as far as a bridleway on the left. Follow the bridleway  to Wrest Park.From the bridleway there are views of the surrounding countryside. In the pasture beyond the lodge, traces of mediaeval ridge and furrow cultivation can be seen.

At the gate on the edge of Wrest Park House car park, past the buildings, take the bridleway on the left and follow it into Whitehall Plantation. Beyond the ha-ha (sunken ditch) there are views into Wrest Park. Walk until you reach a waymarked unsurfaced track on the right.
Whitehall Plantation is of 17th century origin. The tree species in the wood, in particular the fast-growing poplar, reflect the poorly drained quality of the soil. The bridleway runs approximately along the line of an old road to Higham Gobion. Its hollowed-out course can still be seen in Whitehall Plantation, to the right of the path.

4) Turn right and follow the track through the trees to the Gravenhurst road. Cross to the bridleway opposite (if the track through the wood is too wet, continue straight ahead to the road at Ion Lodge, then turn right along the road until you reach the main route where it crosses the road). Follow the bridleway to The Camp where it turns right along the edge of the field. Continue down to the road outside Higham Gobion.
The outer banks of the mediaeval earthworks of The Camp once enclosed a lake which may have been used as a fish farm to provide food for the manor of Higham Gobion. The large mound was probably a nesting island for ducks and swans.

5) Turn left along the road, and then right at the footpath opposite Higham Cottages. Follow the footpath beside the field boundaries to the road near Chalkleybush Farm.
The stream marks part of the county boundary between Bedfordshire and Hertfordshire and the walk rejoins it several times. Near Shillington, a number of streams converge to form the River Hit, which joins the River Flit near Shefford.

6) Cross the road to the footpath opposite and follow it between houses and through a kissing gate. At the corner of the next field, go through many kissing gates and follow the footpath beside the stream, through another kissing gate, as far as a bridge. Turn left at the bridge and cross the field to another gate. Turn right and follow the bridleway uphill to All Saints' Church, Shillington.
The present All Saints' Church dates from the 14th century. The original church was constructed in the 11th century, possibly on the site of an earlier building, by the Abbot of Ramsey Abbey in Huntingdonshire, owner of much land in Bedfordshire at that time. The brick tower is a more recent addition. Many fascinating examples of graffiti dating back over hundreds of years can be found on the inside and outside walls of the church. From the churchyard there are extensive views over the surrounding countryside.

7) Keep the church on the left and walk back down Church lane, turning right at the T junction to take you back to the Crown Public house