The Song of the Turtle Dove: A Sussex Pilgrimage - Hiking Route - United Kingdom

Back
Routes United Kingdom The Song of the Turtle Dove: A Sussex Pilgrimage
Plan a route here Copy route

The Song of the Turtle Dove: A Sussex Pilgrimage 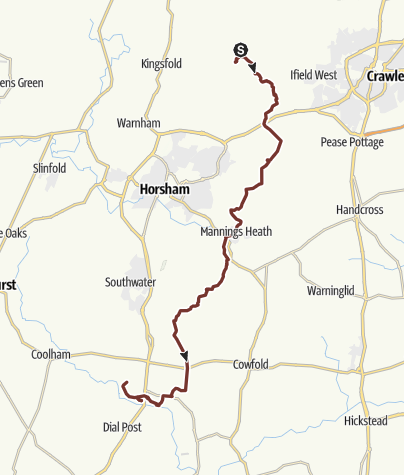 A 1-day pilgrimage from the source of the song 'The Turtle Dove' tin Rusper to one of Sussex's last strongholds of breeding Turtle Doves at Knepp Castle.

This pilgrimage is from Rusper to Knepp Castle, and carries a song from its first human source to its ancient natural source - to re-wild ‘The Turtle Dove’ among the Turtle Doves.

The source of two great rivers – Arun and Mole;

The grave of two great people (Lucy Broadwood, the song collector who started the EFDSS and the modern English folksong movement - and Hillaire Belloc, writer and poet, and prime mover in creating the Winchester-Canterbury pilgrimage route);

The source of two great English folksongs – The Turtle Dove in Rusper, and To Be A Pilgrim in Monks Gate.

And lots of ancient woods and great trees.

It ends, after having sung to the Turtle Doves, by singing at a ‘Re-Wilding' concert at Knepp Castle Estate.