Responsible for this content
Glen Owen
Greg King
on the January 22, 2022 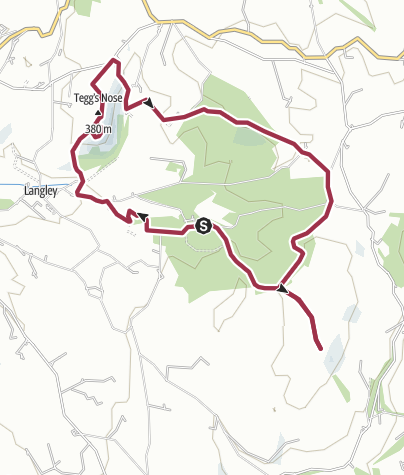 Start point is the Trentabank Reservoir car park, postcode SK11 ONS.This circular walk takes in several reservoirs, Teggs Nose summit (380m) and country park, Macclesfield Forest, and Shutlingsloe Trig Point (506m), known as the 'Matterhorn of Cheshire' for it's distinctive shape
moderate
Distance 13.5 km
Duration4:03 h
Ascent455 m
Descent456 m
Highest point485 m
Lowest point202 m
From Trentabank Car Park take the path which runs parallel to the road going west until it emerges at a lane. Ignore the path entrance opposite and turn left to follow this lane, ignore the first gate on the left, until it leads to another path entrance where the lane bends. Take this path.

The path follows the edge of the forest then turns right to head through the trees, emerging at Ridgegate reservoir. Take the path to the left now which turns left again when it emerges from the forest. The path now leads south back into the trees, crossing a brook before turning right to meet a lane.

The lane will meet Clarke Lane, turn left here to follow the edge of Bottoms Reservoir. Opposite a row of houses facing the water you will see a path signed for Teggs Nose. This path follows the eastern edge of the reservoir then goes over the dam at it's head. Emerging at a lane continue north, now seeing Teggsnose Reservoir on the right.

This lane leads to a car park from which you will see a path on the left heading north into the woods. Emerging from the woods into moorland, the path climbs to meet a well defined path. Turn right on this to skirt around the summit of Teggs Nose. Turn left at the next fork in the path. On the left just off the path will be the actual summit. Head up here and back down, then take the path opposite which descends to the north-east.

This meets the weel-defined path which heads north, eventually meeting another path where you turn right. This meets a road by Teggs Nose Car Park. Turning right onto the car park, you will see Saddlers Way footpath leading south-west. Follow this until it meets a lane (Crooked Yard Road), continuing on in the same direction here.

Follow this through the forest, ignoring any deviations until it emerges at the other side of the trees and meets Charity Lane. Emerging at a larger lane by several buildings, take the lane directly opposite. Turn right when this meets another lane. Follow this south until you come to a junction. Take the gravel footpath ahead through a gate. Follow this clear bridleway through forest until you see a path to the left heading into open moorland.

Follow this path towards Shutlingsloe summit which is visible ahead. Return the same way and rejoin the bridleway heading left and to the north. Ignore the left hand turn, head straight over at intersecting paths. This eventually leads to a road, turn left here to arrive back at Trentabank car park.
Difficulty
moderate
Technique
Stamina
Highest point
485 m
Lowest point
202 m