Responsible for this content
James Bean
Gabe Day
on the November 08, 2021 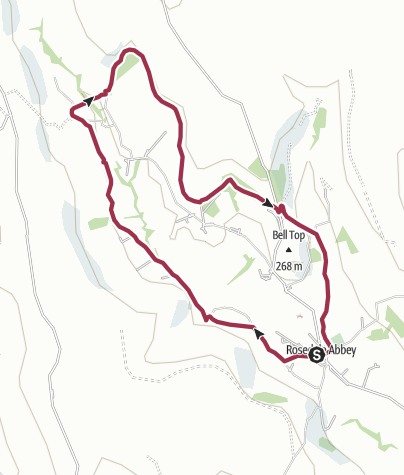 A fairly level walk up Rosedale, returning by the old railway line.
The tea garden at Dale End Farm was an unexpected highlight.
easy
Distance 12.6 km
Duration2:54 h
Ascent293 m
Descent293 m
Highest point295 m
Lowest point137 m
This is a popular route which appears on several sites. Partly for this reason, underfoot conditions are not ideal. We did the walk in early January - the hard surfaces were icey and the soft ground was muddy, which meant we had to walk carefully.
Leave Rosedale Abbey opposite St. Mary's chapel, cross a small park and a footbridge, and join up with Daleside Road. This runs up the West side of the valley, partly on roads and partly across fields. In icey or wet conditions, it may be worth considering following the railway up the West side of the valley from Rosedale Abbey, which would mean a longer trek uphill to reach it. In dry conditions there should be no such problem. This is a section through pleasant open countryside and the hamlet of Thorgill. Further down the valley, Daleside Road becomes a farm track.
The walk turns round the North end of the valley at Dale End Farm. The tea garden here is worth a stop. Even in winter they operate a self-service with honesty box, and the lean-to tea room is charming.
On the way back down the East side, the walk along the old railway line, by contrast, is easier, as well as being the most interesting section of walk. It is fairly level , on a good surface, with good views of the valley and occasional railway artefacts to look at.
When the railway ends in a yard, you drop down onto a woodland track for a km or so. Coming out of the wood, cross the lane, taking a track down past some farm buildings and a pond, and follow a valley down by the Nortdale Beck back to Rosedale. Again, can be slippery in wet weather, but fine landscape.