Responsible for this content
Stephen Doman
Unamed Hiker
on the April 29, 2021 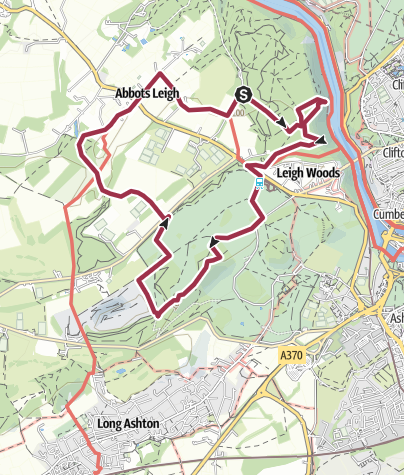 Drive to the unnamed road next to Ashgrove Ave off Abbots Leigh Road. Drive down an avenue lined with Copper Beech trees and park. Walk towards the George following the footpath until Stokeleigh Camp Iron Age fort. Then walk towards Pill, until a path on the righ leading to the cliff edge. Beware of the sudden drop at the edge! Retrace steps to the fort and walk to the view point overlooking the Clifton Suspension bridge, then walk on the other path out to North Road and go to Abbots Leigh Road. Cross the road and go through the wall to the golf course  in Ashton Park.

The park consists of 850 acres of woodland and grassland and at its centre is a gracious mansion, once the home of the Smythe family.  Walk along the track to the golf course car park, past the miniature railway and then down to the drive to the barrier. Turn right, then after about a hundred yards turn right on a track which for a few yards is tarmac and then becomes stony.  Near the top at a marker post, turn left. Follow the path on and it leads into woods.

Go straight down through to a T-junction with a wide track. Turn right, following a metal fence, and continue through the woods on this easy track. Ignore the entrances on the left into the deer park.

After about 800 yards go through the wood, crossing the mountain bike path into open land, on the left is a metal fence behind which is Durnford Quarry. Climb a little, still keeping the fence on the left and continue on to a T-junction with a track. Turn right along the tack, past a track on the left and the gate to the nature reserve. (It is possible to go through the reserve and re-join the route later. Otherwise continue along the track past the nature reserve.

On entering the open area turn left along a track next to the hedge. On the left is the exit from the nature reserve. Continue on bearing right to follow the wall on theleft along Begger Bush Lane. Look for the opening in the wall into the lane.

Cross the road, turn left and almost immediately turn right on a drive/track and follow the Timberland Trail. Pass cottages and, at the end, go straight ahead on the marked bridleway between fences. Start to drop down. Ignore the Timberland Trail which turns off left.

Continue on down through woodland on the track which leads to a lane. Go straight over, passing a parking area and information board. Follow the main path on the left through a barrier and woodland and eventually reach Abbots Pool.

This tranquil beauty spot dates back to the 12th century when abbots from the abbey of St Augustine in Bristol dammed the stream to create the three fishponds. Walter Wills, the tobacco magnate, owned the property from 1915-1945 and landscaped the pond by raising the level of the dam. The Wills family also constructed the cascades below the dam.

At the end of the main pond, turn right along the stone dam wall. On the other side, bear left, NOT using any path that has steps, and climb on a fairly small path which then bears right and leads you to through a kissing gate to a junction with a main track, by another information board. Pass cottages.

After about 100 yards, at the bend, take the left path through a small area of woodland. Shortly, cross a tarmac drive and continue straight on following the marked footpath.

Join a lane and contine into Abbots Leigh. Pass on the left the old priory with a magnificent orangery and at the main road find the George Inn on the left.

Cross and along  Church Road opposite. Pass cottages and then enjoy a great view left over Portbury docks before reaching the church.

Opposite the church, turn right on the footpath into School Field onto the Monarchs Way, which follows the escape route taken by King Charles II in 1651 after defeat in the Battle of Worcester. This is a good spot for a picnic with plenty of seats.

Keep the wall on the right, down in the corner, cross a stile and continue on downhill, across a small valley and climb directly up the other side with a house on the left. Go through a kissing gate and carry on up. After a stile, continue on and reach a drive/track.

Cross the track and take the stile by a gate into a field and follow the left hedge straight on.

Cross the stile and come on to the main drive in Leigh Woods where you left the car.