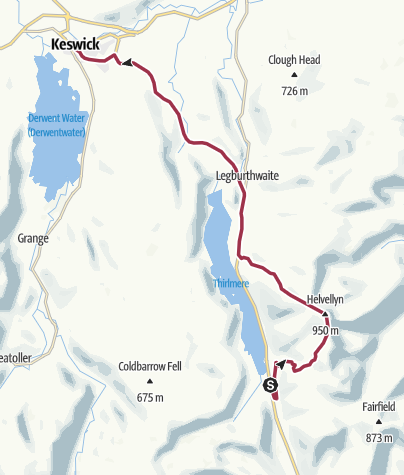 1) From Steel End head E until the minor road joins the A591, almost immediately opposite the junction (NY325139) pick up the permissive Forestry access track (marked with red dashes on OS Explorer map). Follow this path SE for approximately 0.5km to the boundary wall of the plantation (NY327125) where the track loops back to head almost due N.

2) Continue to follow the track N for a little over a km until you reach a cross roads with a walkers path (NY326136). The cross roads is signposted left (west) for Wythburn and right (east) for Helvellyn summit. If the signpost has gone, it’s easy to determine which way at this point, turn right and head upwards!

3) The path, though very steep initially, (ascending approximately 400-450m in the first km), is very easy to follow. At around the 550m contour level the path begins to level as you cross Birkside (NY336135) before it steepens again toward the summit plateau of Nethermost Pike.

4) As you reach the summit plateau at NY341121 the path levels off substantially, heading in a NE direction the route bypass the summit of Nethermost Pike and still on easy ground the path reaches an inverted Y junction (NY343144). The path to Helvellyn’s summit heads almost due north on relatively level ground of the summit plateau. Fine views of Striding Edge can be had to the east (subject to low cloud) and the memorial to the biplane and its pilots which landed here safely and took off again many years ago (indication of how flat it is!) act as useful navigational markers.

5) Helvellyn’s summit (NY342152) is quite open and can feel very exposed in high winds. The summit cairn lies a little to the north of the summit shelter itself from where there are fantastic views to the east of Red Tarn and Catstye Cam and the ‘edges’. Getting to here will be no mean feat and the team can celebrate having climbed all 4 of the 3000’s, the 4 highest mountains in England… but the job is not yet done!

6) From the summit it is almost literally all downhill from here, the route follows a gentle gradient in a north westerly direction for approximately 1km until it reaches Browncove Crags (NY333157). From here the path steepens and care will need to be taken for a couple of km until the car park at Swirls is reached (NY316169). The path is however clearly marked and easy to follow all the way.

7) At the car park with any luck the ice cream van will be waiting… or at the very least the support crew with further refreshments and a replenishment of supplies. There are also some much needed natural break facilities i.e. toilets!

8) Do not get too comfortable following exposure to such luxuries here as the challenge is not yet over, there is still the walk back into Keswick to complete. Depending on how things are going time wise there are a couple of possible routes back to town, perhaps the easiest to navigate and quickest surface to move on is simply to follow the tarmac of the A591 for the remaining 7-8km. The downside is this can be a very busy road with fast moving traffic.

9) The alternative if doing well for time is to cross the road at Swirls to follow the permissive footpath along the shore of Thirlmere itself, re-joining the minor road between Great How and Bridge End Farm at NY312190. Following the minor road NE for approximately 0.5km pick up the footpath (NY314194) that goes behind Bridge End Farm in a NW direction via Smaithwaite to where the track joins another minor road (NY311197).

10) Head N along the minor road for approximately 100m to pick up the footpath heading W then NW first along the edge of the woodland before cutting through the plantation around Smaithwaite Banks and Shoulthwaite Moss to Shoulthwaite Farm (NY299205).

11) At Shoulthwaite farm there are further options the route can either be followed NE for a couple of hundred metres to re-join the A591 (NY300206) for the final few km (downhill!!) into Keswick. Alternatively a path can be followed from Shoulthwaite Farm SW for approximately 250m up a short incline to pick up another path (NY298203) heading N along the base of Bracken Riggs. After a little over 1km this path also re-joins the A591.

12) Following the A591 into Keswick, approximately 200m after the minor road to Castlerigg and before you reach the main urban area (NY279230) is a path off to the left through woodland which after approximately 400m re-joins a minor road (NY276231).

13) Follow the minor road “triumphantly” in a westerly direction for the final km or so back to the Moot Hall at the centre of Keswick… EASY!!!