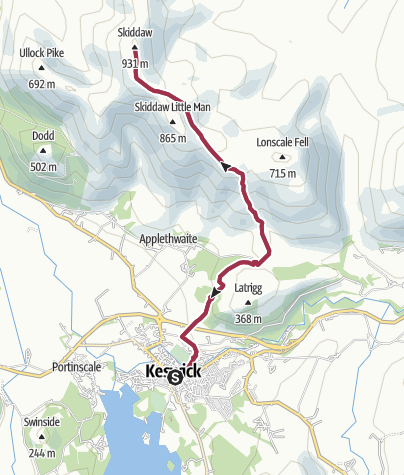 LD 3000s stage 1: starting from the Moot Hall in the centre of Keswick the aim is to summit Skiddaw and return before heading off on stage 2 of the walk down Borrowdale to Seathwaite .
difficult
Distance 16.4 km
Duration5:32 h
Ascent830 m
Descent830 m
Highest point912 m
Lowest point87 m

The route takes its name from the fact that you climb (and descend) all four of the 3000ft mountains in the Lake District (and thus England). What many route guides fail to tell you however is that between Scafell Pike and Helvellyn you can’t avoid climbing a fifth mountain, High Raise, but hey it’s only 2500ft! In fact the total ascent for the route is approximately 10200ft or 3100m.  Overall distance covered is approximately 45 miles and it should take approximately 22hrs to complete leaving a couple of hours spare for the odd unplanned detou and if you’re really lucky a break for lunch... at least this is what the guidebook says, at the time of writing I'm currently planning my third attempt, the best of the previous two having timed out at the foot of Helvellyn before the last leg into Keswick.

A support crew for this route is useful for safety and to reduce the amount of load lugging by those walking. Suggested refuelling stops are at Seathwaite Farm, Wythburn before the ascent of Helvellyn and/or Swirls car park after the descent of Helvellyn. For this challenge, if it can be organised an additional resupply point is useful from a member of the support crew walking into Esk Hause mid way between Scafell Pike and Helvellyn. This is to break up what would otherwise be a very long stage consisting of the most challenging and tecnical terrain and which is inaccessible by car.

A relatively straightforward stage, an out and back from the Moot Hall in the centre of Keswick to the summit of Skiddaw and back, a distance of just under 10 miles with an estimated completion time of approximately 4hrs. Perhaps the most difficult part of the stage is not to call it a day when returning to Keswick!

1) From the moot hall head SE on the Cumbria Way (CW) for a distance of approximately 100m before heading NE on the CW which follows the road at this stage across the river past Fitz Parks towards Calvert’s bridge. Before reaching Calvert’s Bridge the path bears NW along the road for approximately 500m towards Briar Rigg and the sheep pen marked at NY268241.

2) From NY268241, leaving the houses of Keswick behind head NE on the CW around the base of Mallen Dodd and Latrigg for approximately 2 kilometres gradually ascending until you reach the 310m contour at NY283256 where the path reaches a Y shaped fork.

3) From the junction at NY283256 take the left hand fork, leaving the CW heading in a NNE direction to the left of Lonscale Fell towards Skiddaw Little Man for approximately 4km to where the path joins the Allerdale Ramble at NY261285.

5) From the summit of Skiddaw, simply reverse the route to descend back to the Moot Hall in Keswick and the end of stage 1.