Guiting Power and the Windrush Way

Responsible for this content
Jon Ingram
Paul Altmann
on the August 23, 2020 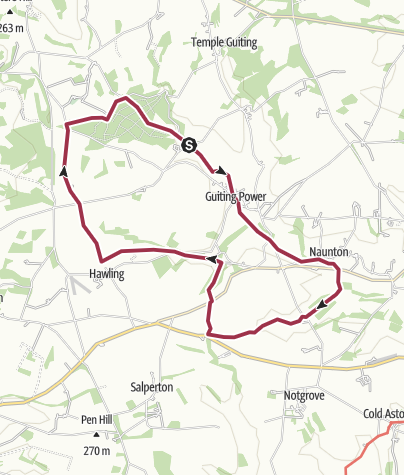 From close to Guiting Power, along a large section of the Windrush Way.
moderate
Distance 19.6 km
Duration5:04 h
Ascent255 m
Descent255 m
Highest point292 m
Lowest point160 m
This route starts at a tiny free car park on backroads close to Guiting Power, and initially follows the Wardens Way until changing to the Windrush Way, which we follow around before eventually picking up the Warden's Way and Winchcombe Way back to the start point.

You may want to do the route the other way round to that described here, as the section around Guiting Wood is really muddy, and it's best to tackle that when you're fairly fresh, rather than 12 miles in (as I did!).
Difficulty
moderate
Technique
Stamina
Highest point
292 m
Lowest point
160 m

Paul Altmann
August 23, 2020 · Community
Comment
Jon Ingram
April 12, 2020 · Community
Good points: * The view down to Naunton, nestling in its valley. * The medieval dovecote in Naunton (sadly closed for renovations at the moment but you can read about it and look at the outside). * Most of the Windrush Way, particularly the bits where you are close to the infant river itself (around Tally Ho house, for example). * The descent into Gazeley Wood. * Waymarking is generally good, particularly on the named routes. Not so good * We're in the middle of the 'wolds' of the Cotswolds, so there are no massive extensive views anywhere, although you do get quite a few variations in height. * Several mud-skating sections, particularly in fields, at least in winter when I walked it! * The final section through Guiting Wood is rather annoying, both for the occasional very muddy path (with nice dry private alternatives temptingly right next door) and the frequent signs warning you away from any alternative routes.
More Show less
Comment