Responsible for this content
John Hockenhull
Emmi Lou Walking Adventures
on the March 06, 2021 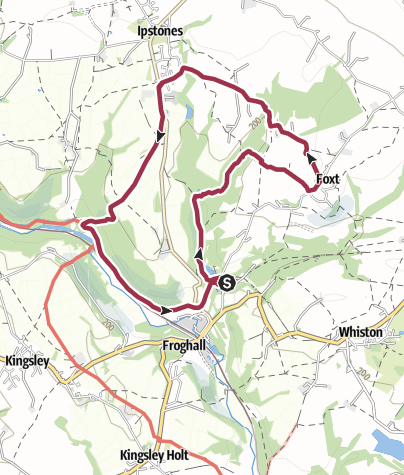 Froghall Wharf Walks: The Green Walk Version 2
difficult
Distance 8.2 km
Duration2:13 h
Ascent135 m
Descent131 m
Highest point256 m
Lowest point128 m
Green Walk waymarkers show the route to follow, however the map on the board in the car park shows a "short cut" which is actually longer and that is the version that this walk follows (except that at Froghall Tunnel the shortcut turns left up Foxt Road to then drop down onto a part of the route that you did on the outward journey. Instead I have crossed Foxt Road and continued along the canal to Froghall Wharf.)

Leaflets for this walk are said to be available from The Visitors Centre (beside the lock on the other side of Foxt Road). Unfortunately this was never open on my several visits to Froghall Wharf. A new Tea Shop (Hetty's) is due to open during 2017 and hopefully they will be available from there.

The difficulty is described as hard due to the sometimes steep terrain. It should be noted that at the steepest points steps have generally been provided.
The surface is described as rough as within the wooded areas there are many brooks, streams and the like. It is therefore very likely that you will encounter muddy areas on the route. Good stout footwear is strongly recommended - this footwear should ideally be waterproof.

The mixture of historical artifacts, large wooded areas and spectacular views make the walks in this part of the Churnet Valley particularly worthy of inspection.

I use Waypoints to mark junctions and stiles but more importantly in order to precisely follow the route. I have found this invaluable when you are unsure where the path is.
20/02/2017
Difficulty
difficult
Technique
Stamina
Highest point
256 m
Lowest point
128 m