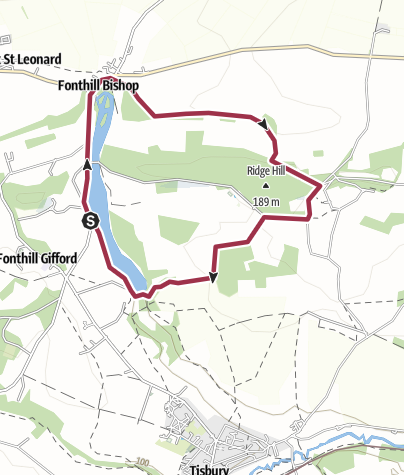 
The vast Fonthill Estate lies tucked away on the rolling northern flanks of the unspoilt Nadder Valley between Tisbury, one of Wiltshire's oldest small towns, and the charming village of Hindon. This wonderful short walk explores Fonthill Park, with its beautiful tree-fringed lake and splendid triumphal-style gateway, attributed to Inigo Jones, and ridge-top woodland and pastures between the estate villages of Fonthill Bishop and Fonthill Gifford. Fonthill House lies secluded on a wooded hillside above the sweeping parkland and to the casual passer-by it is the epitomy of a perfect country estate. It is also the setting for the most fantastic story to be found in Wiltshire.

Fonthill Estate was acquired by William Beckford, a Lord Mayor of London in the mid-18th century. Having built the Palladian mansion, Fonthill Splendens, he died in 1770 leaving a large fortune from sugar plantations to his ten-year-old son William. An utterly spoilt, capricious and extravagant child, England's richest young man embraced Romanticism in all its form, travelling across Europe and writing weird and fantastic tales, notably Vathek, a seminal Gothic novel about a hero who lived alone in a mighty tower. Unlike other Romantic writers, the eccentric Beckford had the means to indulge his fantasies.

Beckford surrounded his estate with a 12 mile (19.3km) long and 12 ft (3.6m) high wall, and commisioned James Wyatt in 1796 to build his Gothic dream palace, a grandiose, partly ruined 'abbey', deep in woodland to the west of Fonthill Lake. Beckford and the slapdash Wyatt built in a great hurry, employing 500 men to work day and night and kept fires burning to prevent plaster and cement from freezing. By 1800, the cruciform building had a central tower 275ft (84m) high and, although unfinished, work had progressed enough for Beckford to entertain Nelson and Lady Hamilton here. Although never completed, the scale of the plan for the abbey was such that the tower was intended to have a spire, elevating it to 450ft (137m), overtopping Salisbury Cathedral by 50ft (15m). Beckford finally moved into the abbey in 1807.
For the next 15 years he lived in the unfinished building as a recluse then, in 1823 when his funds had virtually run dry, he sold the estate to John Farquhar, an equally eccentric gunpowder millionaire, and moved to Bath. Two years later, owing to Wyatt's negligence and dishonest builders, the massive foundationless tower collapsed in a storm, bringing down much of the rest of the abbey. Beckford, meanwhile, was busy building an Italianate tower on the top of Lansdown Hill. Fortunately this didn't collapse and is now the finest surviving example of his work. Fonthill was the classic folly, 'the most prodigious romantic folly in England' as Pevsner described it. Sadly, you are unable to see the abbey remains, a small turret room and the battlemented cloisters, as they are incorporated into a house at the end of a private drive.


1 With your back to the lay-by, turn right along the road (this can be busy) that traverses Fonthill Park beside the lake for just over ½ mile (800m). Pass beneath the magnificent stone arch and shortly bear right to the B3089. Keep to the right along the pavement into the pretty village of Fonthill Bishop.
2 Turn right just beyond the bus shelter on to a metalled track. On passing the 'Private Road' sign for Fonthill Estate, turn left through a small business park on an unsigned footpath. Keep left and soon join a track that bears right uphill towards woodland. Follow the grassy track beside Fonthill Clump and keep to the main track above the valley. In ½ mile (800m) bear right downhill into Little Ridge Wood.
3 The track gives way to a path. At a T-junction, bear left and keep left at the next two junctions, following the wide path to a gate and lane. Turn right through the hamlet of Ridge. Pass the telephone box, walk uphill and bear off right with yellow arrow along the drive to Fonthill House.
4 1n ¼ mile (400m), fork left with the footpath sign to follow a track beside paddocks to pass beside a gate. In 20yds (18m) fork right with a yellow arrow and walk beside woodland. On entering an open field, turn left along the field edge, the path becoming a defined grassy track around the field edge. With good views, gradually descend towards woodland.5 Enter the wood and bear left then right along a gravel track beside Fonthill Lake. Cross the weir to a gate. Disregard the track which goes ahead uphill and bear off right along the lakeside edge. Follow the well established path through two gates, eventually returning to the parking area.


What to look for
Only a wing (a pair of cottages) of Fonthill Splendens remains beside the present Fonthill House. The rest was pulled down by Beckford before he decided to build his Gothic fantasy elsewhere on the estate. Take a closer look at Fonthill Lake. It was used as a location for the filming of Joanne Harris' novel, Chocolat, when a mock galleon was deliberately blown up here.

Where to eat and drink
Drive south from the lay-by for ½ mile (800m) to reach the excellent Beckford Arms. Expect log fires, tasteful decor throughout, rambling bars, a relaxed atmosphere, interesting food from ciabatta sandwiches to rack of lamb, local ales and a sun-trap patio and garden. Alternatively, try the Angel or the Lamb in Hindon.

While you're thereEnjoy a stroll around Hindon, 2 miles (3.2km) north. Founded by the Bishops of Winchester between 1220 and 1250 and handsomely rebuilt by Wyatt following a fire in 1754, it has a wide attractive High Street lined with stone cottages and two fine inns. Visit Tisbury to see the largest medieval tithe barn in England, situated amidst a fine collection of 14th- and 15th-century buildings at Place Farm.
Difficulty
easy
Technique
Stamina
Highest point
164 m
Lowest point
105 m