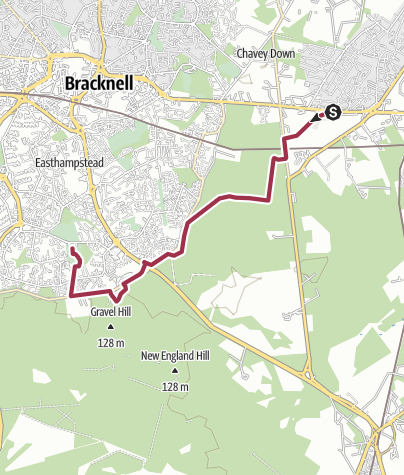 This is a single way route of just over 4 miles so users will need to either park a car at both ends or get dropped off & picked up. There is also a bus service from from South Hill Park (Sainsbury) to Bracknell and Bracknell to Ascot

The route starts at Englemere Pond which is just off the A329 London Road at Ascot and follows both the 3 Castles Path and Bracknell Ramblers Route. It also takes in The Look Out and South Hill Park Arts Centre.

The 3 Castles Path starts at Windsor Castle and finishs at the Great Hall, Winchester Castle. The 60 mile route is one of England's Long Distance Paths and there are several websites and books that explain the route. It is tohught that King John travelled this path on his way to sign the Magna Carta in 1215.

Starting by the pond we see that the edges are covered in quite dense reeds however, in places it can be seen to it's full splendour. We follow the path to the right of the pond and keep going until we see the car park. Go through the car park and out the other side onto the Swinley Road. Note the Ramblers Route waymark on a post opposite the car park entrance.

Turning left onto the road, follow it over the railway bridge taking great care as cars travel quite fast. My advice is to walk with the traffic on the left, crossing the road on top of the bridge where you can see traffic in both directions. A short way after the bridge, turn righ through a kissing gate into Swinley Park.

After a short distance you will come to a crossroads of pathways. Take the left path up the shallow hill. At the top, turn sharp right. You will notice that the tall pine trees have now been replaced by ancient forest. This path is known as Windsor Ride and it was used by royalty for hunting in long past times.

As you continue along the path you will come to a clearing on the right side which has a path turning ride. The path, you will see is bordered by ancient trees planted equi-distant in a semi circle. This has always intriuged me as it seems to be man-made and reminds me of a similar area in Windsor Great Park which has a statue of Queen Elizabeth II at it's centre. I wonder if in the past there was a statue here too?

Continue along Windsor Ride as it bends left and downhill. At a small post, note the Ramblers Route waymark sign and turn right, through a gate to the road - New Forest Ride. Turn left and walk along the road to the roundabout. Turn right and go over the walking bridge descending and continuing towards Coral Reef and The Look Out.

Cross the road at the lights into the lookout and consider the option of stopping for a snack or drink at the cafe, or taking a look at the science centre. You cam also hire bikes in the summer, ascend the high tower or take part at Go Ape. The Look Out has enough amenities to last a whole day.

Leave the 3 Castles Path and follow the route through the Look Out and again cross the Nine Nile Road, taking great care. Turn left once across the road and walk along the path beside the road. At the sign saying "Juniper" turn right and follow the path to the Ringmead Road. Cross and continue past the primary school. Turn right and then left and walk across the open space to South Hill Park Arts Centre. There is a bar and cafe here but also take time to look around the rooms at the exhibitions and pick up a few leaflets about what's going on there.

If the weather allows, rest your feet with a nice pint on the terrace!