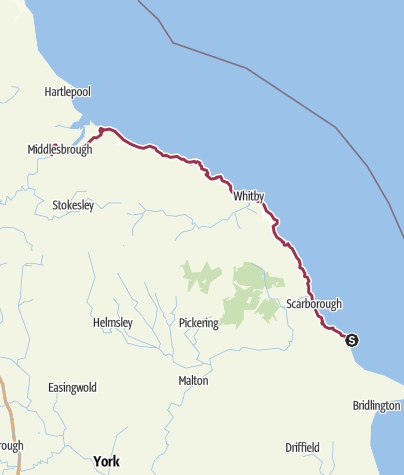 This is the official route of this section of the England Coast Path National Trail.
This 68 mile long stretch runs from the dramatic cliffs of the North Yorkshire coast, through the resorts of Scarborough, Whitby, Saltburn and Redcar into the industrial heart of Middlesbrough.
easy
Distance 107.1 km
Duration28:20 h
Ascent1,123 m
Descent1,151 m
Highest point195 m
Lowest point-3 m

The England Coast Path will be a new National Trail all around England's coast. It's opening in sections and will be complete in 2020. When it is complete it will be the longest continual coastal walking route in the world.

This 68 mile long stretch is the longest part of the England Coast Path yet to be opened and runs from the dramatic cliffs of the North Yorkshire coast, through the resorts of Scarborough, Whitby, Saltburn and Redcar into the heavily populated and industrial heart of Middlesbrough. The trail connects the communities of Teesside with their beautiful open coast, with its beaches, small fishing villages and remote cliff tops, and promotes tourism and healthy exercise in the area.

Part of this stretch comprises the coastal part of the existing Cleveland Way National Trail. Whilst most of the Cleveland Way south of Saltburn has been adopted as the best route for the England Coast Path without much change, the ability of the path to adapt to coastal erosion via “rollback” has ensured that the path will be available for walkers in perpetuity - a major plus for this spectacular, but crumbling coast.

The England Coast Path is happening because of a completely new right of access that gives everyone the legal right to explore our coast for the very first time. It is much more than just a path, it gives access to beaches, cliff-tops, and most of the wonderful habitats around our coast. You can see the open sections and how they relate to the other National Trails here.

Coastal sections of existing National Trails will become part of the England Coast Path in time. This will give the Trails better protection when the coast erodes. The Trails won't lose their own identities though, they will still be National Trails in their own right and the signage will be the same, but you may see new signs saying 'part of the England Coast Path'.

You can find out about the other National trails on the official National Trail website.