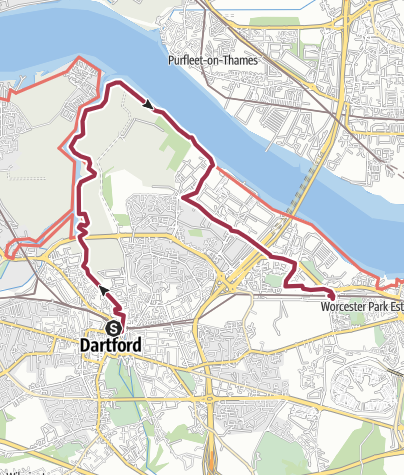 The Thames / Darent waterway was well used by the Romans, Dartford was a major ford on Watling Street to get to London. The marshes were drained in Medieval times and there was farming. Most of the local names are old farm names. Chalk was found in late 1860s and the Dartford Portland Cement Works (similar to Bluewater site further east) was created and did well helping to build London. There was progressive disuse after the 2nd world war and the area was left as a blasted landscape with slag heaps. Regeneration began in 1988, with an Asda distribution centre.

Smallpox isolation ships (two hulks from the Napoleonic wars and an old Channel Paddle Steamer) used to be moored off the marshes, but their conditions deteriorated, so a specialist hospital was built for infectious diseases and was later used during the 2nd world war as a military hospital. And what got rid of Smallpox? yes vaccinations!!

GSK closed the site down in 2011 and there is a now a housing estate being built (given the number of trains to London, not too surprising)

The Ministry of Transport proposed the Dartford tunnel in 1924 and work started in the 1930s but was interrupted by the war, they recommenced in 1950 and the first tunnel was opened in 1963, the second tunnel was completed in 1980. The M25 connected to them in 1986 and the QEII bridge was opened in 1991.

What we will see started nearly 100 years ago.

So, as we walk you have a choice of imagining the roman / medieval pastoral scenes of this part of the Thames, the industry of the chalk mining and the paper mills, the hospital ships and sanatorium, the chemical works, and now a regenerated area with Lakes and green spaces, houses and huge warehouses, all in the shadow of the QEII bridge.
Difficulty
easy
Technique
Stamina
Highest point
17 m
Lowest point
0 m