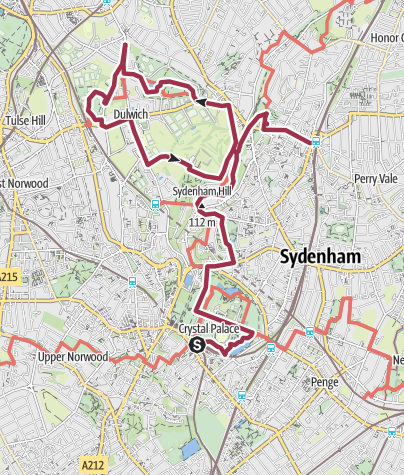 Short surburban London walk with plenty of interesting and unusual features.
moderate
Distance 12.1 km
Duration3:08 h
Ascent97 m
Descent126 m
Highest point113 m
Lowest point30 m
This short suburban walk takes in five attractive parks and gardens with plenty of interesting and unusual features. The majority of the walk is necessarily on urban paths and pavements but two sections explore the neighbouring Sydenham Hill Wood and Dulwich Wood, the last remnants of the ancient North Wood which once covered south London (and gave its name to the suburb of Norwood).

The Crystal Palace was the popular name for the vast building which was constructed in Hyde Park for the Great Exhibition in 1851. After the exhibition closed it was rebuilt in south London and the surrounding area eventually acquired the name. The building was completely destroyed by fire in 1936 and only traces of the gardens and terraces survive. The small Crystal Palace Museum tells its history: open weekends and Bank Holidays only from 11am, last entry 3pm winter, 3.30pm summer; free admission.

The most unusual sight on this walk is the Crystal Palace Dinosaurs, the first ever life-size sculptures of dinosaurs and extinct mammals. They were constructed in the 1850s – before the publication of Darwin's On the Origin of Species – and extensively restored in 2002.

The central section of the walk is through the leafy suburb of Dulwich and passes Dulwich Picture Gallery with its important collection of European old master paintings: open daily (except Mondays) from 10am (11am weekends), last entry 4.30pm; admission (2017) is £8. Alongside is Old College, the original site of Dulwich College which later became one of England's largest independent schools in the New College buildings.